September 17. I woke up with a start. Yipes! 6:15 am already. No wait….where am I?  Oh, I’m back at home. I went back to sleep.  With the impending deluge of Florence’s aftermath I decided late Friday to head for home. So on Saturday morning I went to Tryon and gathered up my camera gear, had breakfast and hit the road choosing a more westerly route so as to avoid  the heavy rain that was forecast.

WEG 2018 was an amazing experience. There were some upsets: the course misdirection for the Endurance riders, the eventual cancellation of the Endurance competition. And then there was Florence. She did not make an appearance as a full fledged hurricane but she was still packing a wallop as she moved inexorably toward the WEG location. The WEG Media sent out regular emails to keep the accredited media  informed.  But as the weather forecast got worse an urgent statement was issued.

Despite the best efforts of the whole Tryon 2018 team and the Officials, who have been working on plans for rescheduling since yesterday evening, including meetings with the Chefs de Mission and Chefs d’Equipe, the logistics of putting all necessary elements into place in time have proved insurmountable. As a result, and very regrettably, the Dressage Freestyle will now be cancelled.

I believe they did explore every option but rescheduling to the Monday and all the European horses having to fly out on the same day was not in the best interest of the horses’ welfare.  I also believe that all the decisions that have been made have been with the horses’ best interest foremost. Also each statement would reference the FEI ruling that would cover any such decisions.

Now on to lighter topics!

I took this photo on Tuesday morning after I arrived and by the afternoon it had filled in considerably. Tryon had to step into the breach and stage WEG with only 18 months to build facilities and prepare for this huge event. As you can see the decorative elements of the building, which also houses the Broadcast media and VIP Hospitality on the second floor are not completed. But for us, in the media, that was of no consequence.  We had air conditioning. high speed wi-fi, and every table had AC cords with power bars for every 4 seats.  And ….we had catering for breakfast, lunch and afternoon snack. Here is my breakfast. Grits! I love grits and they have that stick to your ribs value that gets you through to lunch.

Lunch had a selection of salads and always one hot dish as well. Lots of choices.

The only thing missing was a finished washroom. However there were plenty of porta-loos nearby. Which brings me to a question….why is it that women will line up  with 15 -20 other waiting to get into the only permanent women’s washroom when there are 10-15 porta-loos only feet away? The porta-loos were clean and well maintained. So why stand in line for 20 minutes waiting? If you have an answer to this please leave it in comments below.

The Media Center was truly “International”. At the table where I was sitting we had  2 Australians with their flags, the boxing kangaroos, 2 British, 3 French, 2 German ex-pats now living in the US and next to me a woman from New Mexico. Behind me were a group of Brazilians and an English group led by  a young man who should take up a career in modelling or film( tall, handsome etc) and also learn not to talk in such a loud voice. We don’t all need to know he’s going to go and get lunch NOW!

I decided to represent Canada at the table and a group of Canadians from the Endurance team gave me a small flag. I attached it to my car mascot, George, who by the second day was also wearing a gold necklace. I have no idea who donated that! 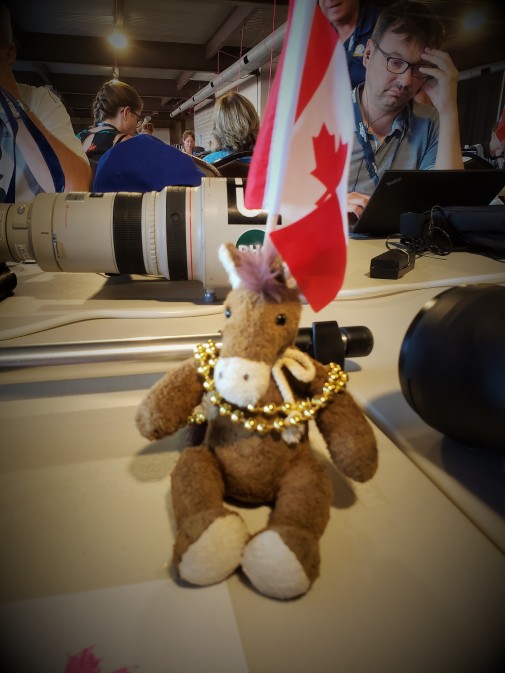 It was easy for me to get out the exit at the back of the hall and down the stairs to the arena for taking photos. I could stand in the corner and get good shots or stand  behind the judge’s booth at C and get good shots of the centerline. I preferred the side as I could get the extended trots on the diagonal and also the horse and riders as they turned in front of the judge. 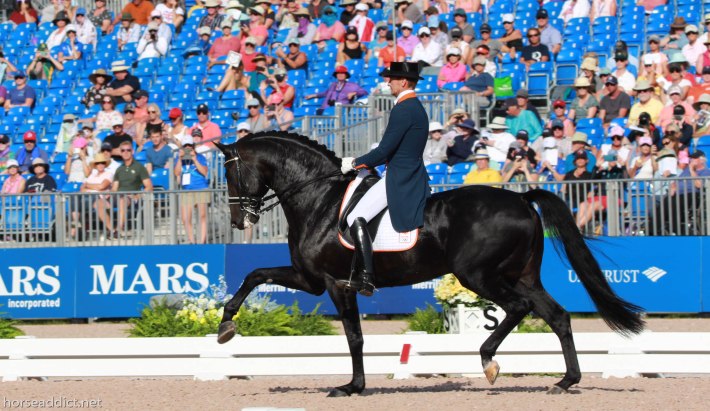 For the medal presentation ceremonies I was with the other photogs outside the ring at the side. This is a good safety precaution as the riders come in mounted and there is always a high level of excitement for the horses.

The only media allowed inside the arena are the video guys with the host broadcaster. Here is one filming the medals, which are ready for presentation on a tray, and also having a chat with the young women who were holding the Longines watches that would be presented to the medal winners.

Finally just for a bit of fun here is my Rogue Gallery photo. Isabell Werth and Bella Rose have just finished the Grand Prix Special and Isabell knows they have aced it!  She is saying :”Yes!” and Bella Rose is saying: “I always like to stretch my neck before I have to go into the medal presentations. Another Gold for me and my human!

I have a couple of other rogue gallery photos that I will save for another time. For now…It’s a wrap.  Thanks for joining me and reading along.