“I hadn’t realized how much I had envisioned him there. I thought that once we got the small barn built that he would be there. Right there in my back yard.” Abbey looked at me as she said this, with the pain still in her eyes.

A horse is not a pet. It is not the same as a dog or a cat. And while losing a pet may be heartbreaking it does not in any way resemble the disaster that is losing a horse.  This is the story of such a loss. This is the story of how Abbey lost Fred whose official name was Canción (Spanish for song). Here is the song of Fred and Abbey.

“I was looking for an advanced horse to learn on. My coach took me to see a horse and the minute I saw him I fell in love. I thought he was the most gorgeous horse I had ever seen. He was exactly what I wanted and when I tried him I had a perfect ride. His owner told me that to get the flying changes all I had to do was to give him a poke.  I was so inexperienced then that I did not understand he meant a poke with my leg. So, I set off at the canter and across the diagonal I just gave him a poke with my fingers, on his neck, for each change. And he did it! He did two’s and three’s! I’m embarrassed to admit that now but I learned the proper aids later and I realized that changes were his gift.”

But despite having fallen in love with him Abbey soon found out Fred was not such an easy ride.

“There was some behavioral stuff I had not signed up for. For example, in the warm up at shows he would have major fits but when we got into the ring he would be perfect.”

Abbey decided to go outside of the box to try and get Fred over some of his behavioral issues. She dispensed with the double bridle and rode him in a snaffle with no flash, she tacked him up in his stall instead of in the crossties, turned him out with a herd of horses and only rode him outside not in the arena.

“I turned his world around and over the next year and a half we formed a great partnership.  We continued on and he saw me through two pregnancies. When I was riding him and pregnant he would not put a foot wrong.”

Abbey and Fred continued along together and over the years he matured into a senior citizen. At the age of 23, when Abbey had owned him for 13 years ,he began to show some signs of his age. Abbey tried several conventional and also alternative therapies to keep him comfortable. But then he developed an odd wrinkle.

“He seemed to be having some senile moments.” Abbey told me. ” He was oddly spooky. I gave him a break from work and then started to bring him back. One day when I was riding him, it was quiet with no wind or noises, the ride was going beautifully and then, out of nowhere, I was flying through the air like Superwoman.

On the ground I was laughing and crying at the same time. I cried because I knew it would be my last ride and laughed because it had been the same on one of my first rides. I had flown through the air like Superwoman.

So, I retired him. I did not want to lease him or part board him because I knew that he had finished with the working part of his life. I still lunged him for exercise and brushed him and kept him in the same barn. He was not a horse that could be turned out 24/7. I was so lucky that the owner of the barn, Morgan, treated him like one of his own.”

Fred seemed happy with this arrangement. Then on Sunday September 10, 2017 Abbey got a call.  Fred was colicking. An attack of colic is very serious for a horse and it means that the horse has some intestinal problem, possibly a blockage, or a twist. Sometimes it can resolve on its own but it is very painful for the horse and if it does not resolve it requires a major surgery.  Fred had already had colic surgery before Abbey bought him and had many episodes of colic while she had owned him but most of them had resolved with some pain killer and muscle relaxants. When she got to the stable she could tell by the expression on Morgan and the vet’s faces that this was a very serious episode.

“The colon had prolapsed and at the age of 24, I was not going to send him for a trip of over an hour in the trailer to the veterinary hospital for surgery. This was not a financial decision. I would have remortgaged our family home if I thought it could cure him but I knew at his age he would not survive the surgery and even if he did he would not survive the recovery after surgery. “

The vet gave medication to ease Fred’s pain. Morgan and Abbey sat down outside to talk about what to do. They both hoped that maybe Fred could pull through, just one more time. But it was not to be.

“We had him in the arena to walk him and he dropped to the ground and put all four legs up in the air.” This is a position that horses in severe intestinal pain will adopt to try to ease the pain. They managed to get him up again.

“It’s  time.” The vet said and he and Morgan gave Abbey a final minute alone with Fred.

“He ……” her voice was choked with emotion as she told me this. “He dropped his head onto my chest and I cried out in emotional agony.”

When a horse is euthanized the vet will give a sedative and once sedated he will then inject a massive dose to stop the horse’s heart. The horse will usually collapse to the ground within seconds. This is not at all like having a dog or cat euthanized. Horses are such large, majestic animals and when they go down you have to stand back out of the way and just let them go. And then… they are gone.

“I know it was the right decision to say goodbye. It was the quietest most peaceful send off. He was so ready. Once he was gone I was ok. I drove home at 2 am and did not cry.”

But the next morning her young son Sam came into the bedroom.

“I had woken up and panicked. I’m never going to see Fred again! Sam looked at me and knew something was wrong. I told him Fred was gone and he exploded into tears. He kept saying ‘It’s my fault. It’s because I gave him too many apples on Saturday.’ I said, “Absolutely not. You gave him a wonderful last gift.” 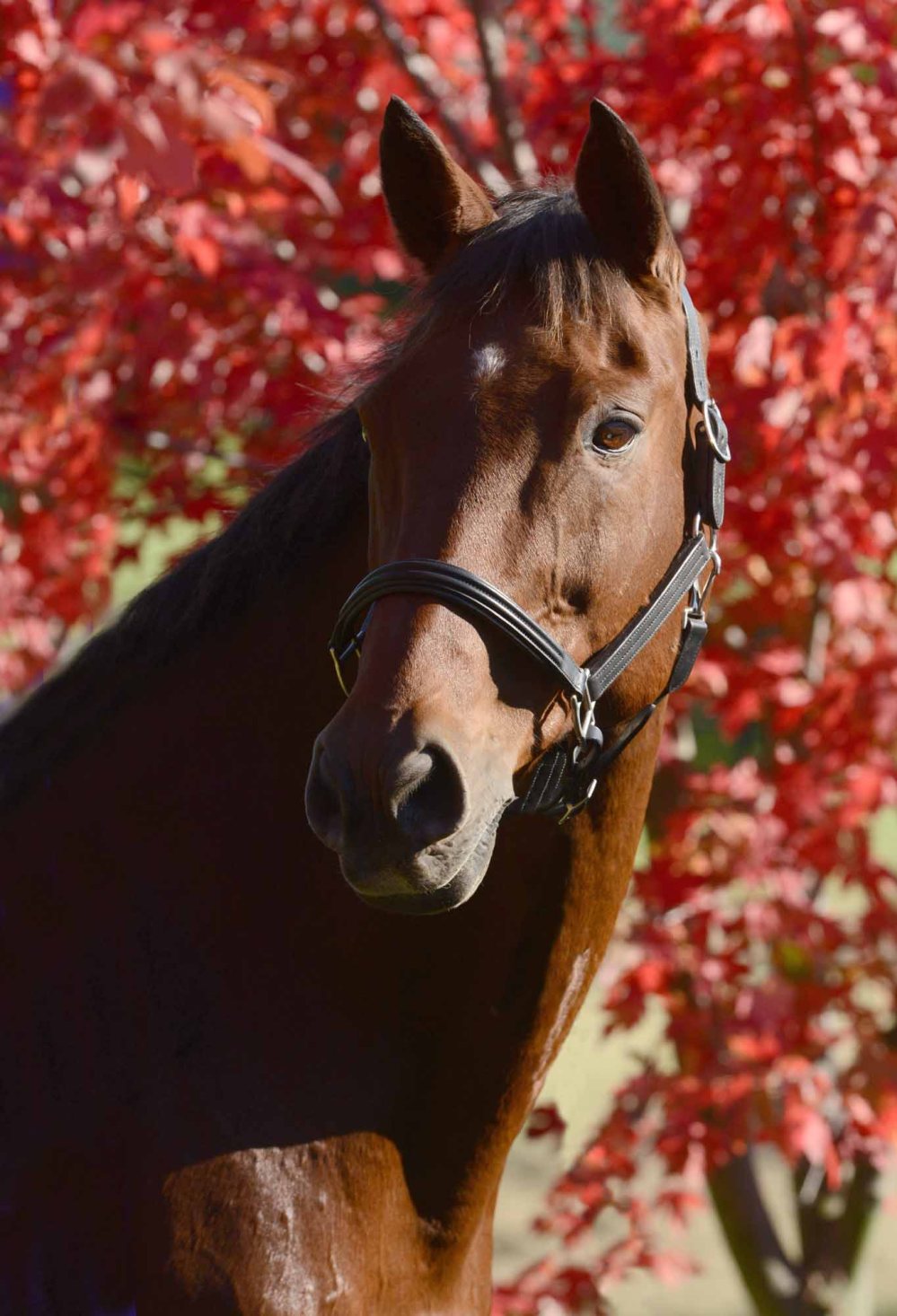 Like many of us who have lost horses it has not been easy in the days and weeks that followed.

“It has been hard and I have not communicated how much of a difficult time I am having.  When I am at the barn I get flashbacks but each time it gets easier. One day I’m ok then next day I’m not ok. I miss him.”

Abbey is leasing a Grand Prix schoolmaster and also has a young horse coming along. She says that having these horses has helped a lot with her grief. And why is it that losing a horse is such an overwhelming grief? They are not pets. They are not natural companions for humans. We are predators, hunters just like dogs and cats but horses are prey and in nature would flee from predators. But the horse has agreed to be domiciled. The domestication of the horse and humans learning to ride horses changed the course of history for humankind. The relationship with a horse is both a working relationship and a friendship.

“They are amazing beings.” Abbey said. “They give themselves to us and allow us on their backs which is amazing in itself. They don’t have to.”

It is hard to explain the emotional devastation to those who do not ride or have horses Abbey told me. “They can’t feel what I’m feeling so I don’t want to talk about it. And I don’t want to do an ‘over the rainbow bridge’ post on Facebook. I wanted to find a respectable way to let people know. “

When you lose your horse, you lose the dreams that went with that horse. Abbey and her husband had just bought a property with ten acres in the country and they plan to build a small barn for a few retired horses. Fred was to have been one of them.

“My dream was that I would have him, my best friend, in my backyard. That dream died with him. “