This Friesian horse is a champion. No, he will not be the first Friesian to win the Olympic gold medal in dressage nor will he be winning in a Regional Championship with an 80% in Grand Prix. So why is he a Champion?  Well, I’ll tell you.

His name is Tornado. That’s pronounced Tornahdo not Tornaydo. There is no Tornaydo in this fellow’s temperament. His owner has been away on vacation and his coach Lynsey Rowan, who has gone to Rio with Belinda Trussell, asked me to ride him while they were away.

Tornado is a polar opposite to my own horse Biasini. His natural carriage is head and neck up in front of me. Biasini likes to imitate a cutting horse and has to be ridden UP in the shoulder, neck and head.  Tornado has to be encouraged to lower the head and neck and to stretch downwards.  Biasini, as a Warmblood, has lots of “air time’ in his trot and canter. Tornado, as a Friesian, has lots of knee and hock action as befits an elegant carriage horse but not so much swing and cadence. His trot is very comfortable and easy to sit to. The white brushing boots you can see in this video clip are on because he tends to interfere behind.

The canter is a bit of a struggle for him and Lynsey encouraged me to keep him going forward. Forward!  With this encouragement he canters well enough to the right but the left is not so easy for him. In this video clip you can see that I took a bit of time to get him walking along the track. He likes to cut corners and wander a bit. Also I wanted him to just walk and lower his neck and then pick up the canter. This is something he can do very well but sometimes has to be gently reminded of how to do it as you can see in this video clip.

He is an easy going fellow who tries his best to do what is being asked of him within the limits of his ability.  What more can you ask of a horse? I have learned a lot from having to express myself differently with him in order to help him to understand what I want.   He is also completely safe. I have had him out hacking around the property and have ridden him in the outdoor arena. No problems at all.

He is polite and well behaved on the ground. To be honest he is quite a bit more polite than my Biasini who can be a bit of a character at times!  Tornado has a lovely kind eye and as you might imagine, as he is a Friesian, he is so very handsome. Recently two little girls were at the barn. They met Biasini and he was ok and they were introduced to the horse going to the Olympics and he was ok as well. Then….they saw Tornado being brought in from the paddock. Their eyes widened. Their mouths dropped open. They gasped. One was speechless and the other said: “Oh he’s SO handsome! He’s beautiful!”

That’s why he’s a Champion. He’s a safe, willing worker, comfortable to ride and you can take him anywhere. That is worth a lot for an amateur rider. And to top it off….he’s stunningly handsome! 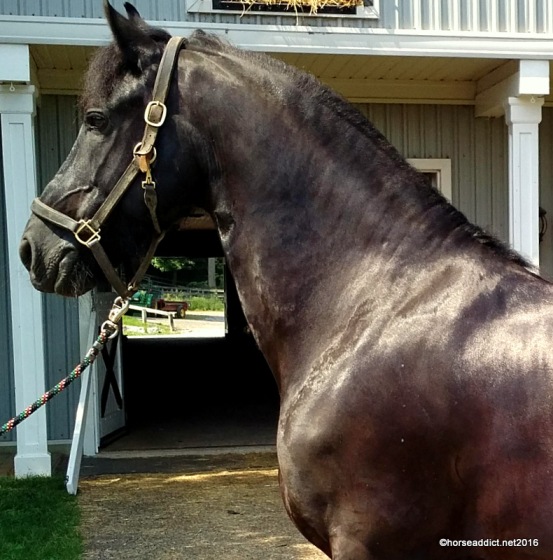