In the Grade 1 competition ,the horse and rider combination with the highest FEI ranking, Roxanne Trunnell and Dolton ,went early in the order of competition and received an 81.464% percent from the judging panel That was a whopping score and they won the Gold Medal! This is the first individual gold medal for the USA Para Equestrian Team since the Atlanta 1996 Paralympic Games.

It felt like he was really with me and was a really good boy,” said Trunnell. “I didn’t know what he would do, and he surprised me with how calm he’s been. I think this experience has been wonderful everyone is so nice here and helpful.”

Trunnell has been under tremendous pressure of expectation due to being the number one para rider in the world per the FEI individual ranking. How did she cope with that pressure?

“I really don’t really think about pressure that much, that’s all just noise to me. It’s just me and Dolton doing our own thing. He is loving all of the attention,” said Trunnell. “Dolton is a very goofy young horse. He can be temperamental, but also very easy to get along with.”

I did not see the Grade 1 riders as with Tokyo 14 hours ahead I would have had to be up most of the night. But first thing in the morning I did see Canadian Lauren Barwick’s ride. She was the last to go in the Grade 111 class. I thought her ride was good and very consistent. I had watched four riders before her and I knew the tricky parts of the test that had led to mistakes for the other riders. As she came out of the arena her score was announced 70.00 % This put her in 9th place just a fraction behind Australian Emma Booth who scored 70.059%. The top eight finishers in each grade qualify for the freestyle. But Lauren was happy with her test .

“My horse felt the best he has felt in the warm-up and completely connected with me in the arena,” said Barwick, who focused primarily on relationship building and teaching compensating aids to Sandrino in their relatively short partnership of just over a year together at the FEI level. “He’s young, has never experienced anything like this before and he stayed with me and was a good champion. I’m excited for what we can bring to the table

“My plan is to focus on trying to bring more of what the judges are looking for to my next test to improve on my score and work towards a personal best. My coach, Shannon Dueck, our Chef d’Équipe, Clive Milkins, and I will review the test sheets and see what it is that the judges were missing in today’s test and see at this stage, in my partnership with my horse, if we can improve on that while keeping a good relationship.”

Roberta Sheffield also rode in The Grade 111 Class and scored 69.353% for 12th place. Roberta was very happy with her mare Fairuza.

She’s growing into herself; the more experience she gets, the more she impresses me.”

Jody Schloss rode in the Grade 1 class and scored 69.286% for 11th place. Jody was very happy with her horse.

I actually was really happy with my score because I thought he did so well. I was impressed with how forward he was and how he was really listening to everything I was asking. I love Lobin so much, he has really learned to be a para horse. At the beginning, he was a bit anxious about everything and now he knows, ‘Okay, I have to behave.’ The thing I love about him is he’s a really hard worker and he always tries to do really well for me. When I praise or reward him, he’s so happy that he did well.”

The Fourth Canadian combination was Winona Hartvikson and her horse Onyx. Riding in the Grade 1 class they scored 69.893% for a 9th place finish in their Paralympic debut. A very respectable score for their first time in the Paralympics!

“I am relieved that I’ve been able to get through the first test successfully and with a respectable score,” said Hartvikson, whose first major games appearance was at the Tryon 2018 World Equestrian Games alongside her Tokyo 2020 teammates. “I would’ve liked to have higher marks, of course, but tomorrow’s another day and I think that we can do better and will be super.” 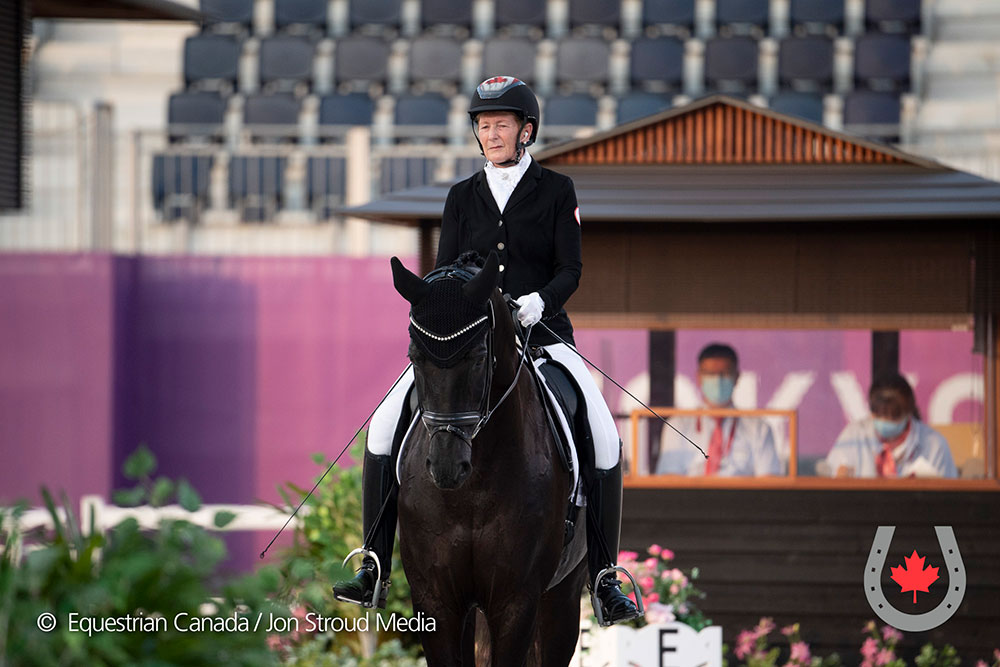