“Why would they build this place right under the flight path for a busy airport like Heathrow?” Simon Metcalf MVO, Armourer to the Royal Collection,  who was our guide at Windsor Castle, told us he has heard this often.  Considering that Windsor Castle was first laid out by William the Conqueror I think it is safe to assume that there was no Heathrow airport with planes coming in to land every 30 seconds in the 11th Century.

Windsor has been added to by successive monarchs including Henry II, Charles II, George IV,and Elizabeth II.  Queen Elizabeth is the only one who would have been disturbed by the Heathrow flight path and she still spends a lot of time at Windsor and rides out on her ponies in the park even today.  But on my visit to Windsor I did not see her riding in the park. But what we did see, on our third day of the Arms and Armour tour, was the Arms and Armour Conservation Studio where Simon Metcalf showed us the new facilities and introduced us to one of the people currently working on restoring Japanese medieval armour.  Maintaining and restoring armour, chain mail and textiles that are hundreds of years old without destroying the authenticity of the piece is a real challenge and it was fascinating to learn of the techniques used and to see the enthusiasm that the conservators bring to their work. I do not have any photos as photography is not allowed in the Conservation studio or Windsor Castle itself.

Having spent the morning in the Conservation Studio we went into the Castle in the afternoon.  The rooms including the Grand Vestibule and the Queens Guard Chamber are decorated with armour and weapons. If you were a visitor to the Castle in days gone by you would have known you were visiting the ruler of a great military power.

Simon also let us see a “behind the scenes” side of Windsor Castle……the kitchen! Here in this huge kitchen there was a vast collection of  spotless copper pots hanging and plenty of room for preparing food for state banquets.

The fourth and final day of our tour took us back to the Tower of London. Bridget Clifford, the Royal Armouries’ Keeper of the Tower took us through the White Tower. and introduced us to the wooden horses. Armoured figures had been displayed on wooden horses at the Tower since 1652 but between 1685 and 1688 a bigger and better set of figures and horses was ordered for the Line of Kings.  We were able to see many of these horses. Each one is unique and carved by expert craftsmen. The most famous of all English wood carvers,  Grinling Gibbons is said to have carved one of the horses but no one is sure which one it is.

The horses are life size standing 14-15 hands high and are carved from large blocks of oak, pine or elm and then pegged or glued together. The finer details of hooves, teeth and manes were carved and the horses were painted and tacked up with  splendid saddles and bridles. They were stallions, war horses, fit for kings.

The horses were displayed in the White Tower from 1883 parading around the top floor. By the 1960s there were fewer on display and some had been lost to damage by wood worms. The surviving horses  have had paint analysis and xray and in 2012 -2013 endoscopy into their insides by removing their tails and inserting an endoscope.  This revealed some repairs that have been done over the years and five or six layers of paint! Only the eyes have never been repainted. 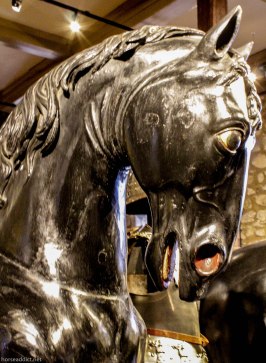 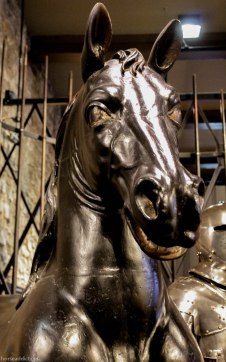 Bridget also showed us the armour of Henry VIII mounted on his white stallion.

This armour is silvered and engraved with Tudor roses and pomegranates.

It is said that Henry VIII spent as much as £4000 on armour for a tournament. The cost at that time to build and equip a war ship was less at £2000.

We were able to leave the tourist route and go up onto the roof of the White Tower. It was a windy day and the Union Jack unfurled with the Shard in the background.

That marked the end of our Arms and Armour tour. All four days had been a marvelous experience; experts to share their enthusiasm and knowledge with us, the privilege of being given private viewings, and the joy of seeing the wooden horses given pride of place in the White Tower.