The grooms. They are the unsung heroes. We see the horses and the riders perform but without the grooms they would not be able to do so well. I think it is well known now that the grooms were sadly let down at WEG Tryon 2018. There was a serious lack of accommodation that resulted in grooms having to crowd in with one another and to sleep two in a narrow bed designed for one. Also the food catering was insufficient for the numbers and on some occasions the catering simply ran out of food. On top of this there was a lack of transportation to get the grooms to and from the stables other than walking and that took half an hour. Grooms go to the stables early to feed and are there again late at night for a night check on the horses.

The grooms do not like to complain to the riders of the horses they are looking after. Why? They don’t want to upset the rider during such an important competition. That is how grooms are. They put themselves third in the line of importance. First comes the horse, then the rider and finally themselves.

So let’s hear it for the grooms. Here are some photos. At the medal presentations the grooms walk in leading the horses and riders if the horse may be the least bit nervous about the cheering and the noise. In the photo below the groom for Verdades, Laura Graves horse, is carrying a bucket. I suspect there are some treats in that bucket to help to keep Verdades occupied during the medal ceremony. He’s being given one now as they walk in! 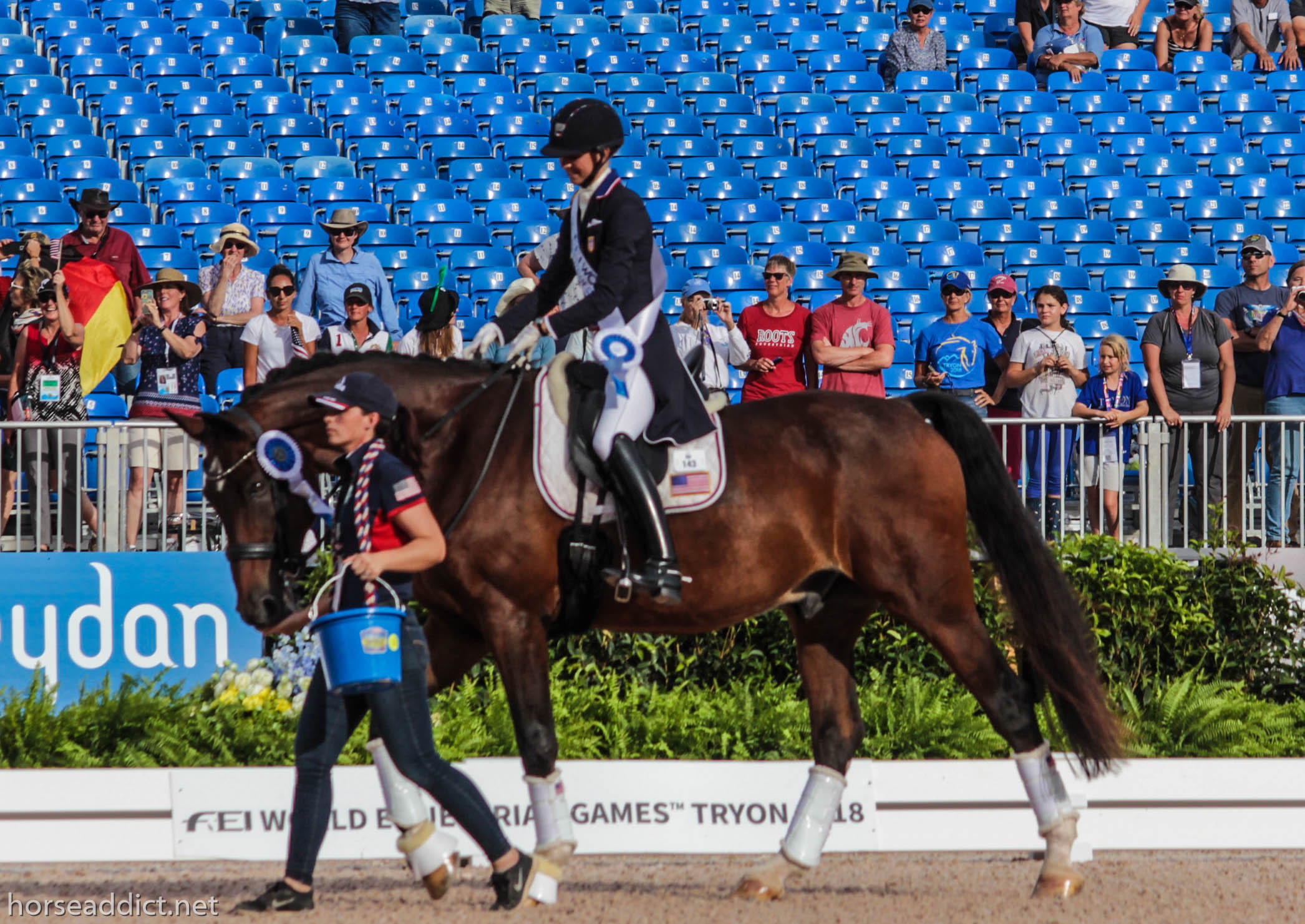 Once the are in the riders dismount and walk to the podium. They get up on the podium and receive their medals and pose for photos. There is the national anthem of the winning team or individual. At WEG Tryon the medalists  also received watches from sponsor Longines, and posed for more photos. Then they posed for photos with the organizers of the show. This is a long time for a horse to be standing and listening to applause and cheering. The groom must keep the horse calm and occupied. 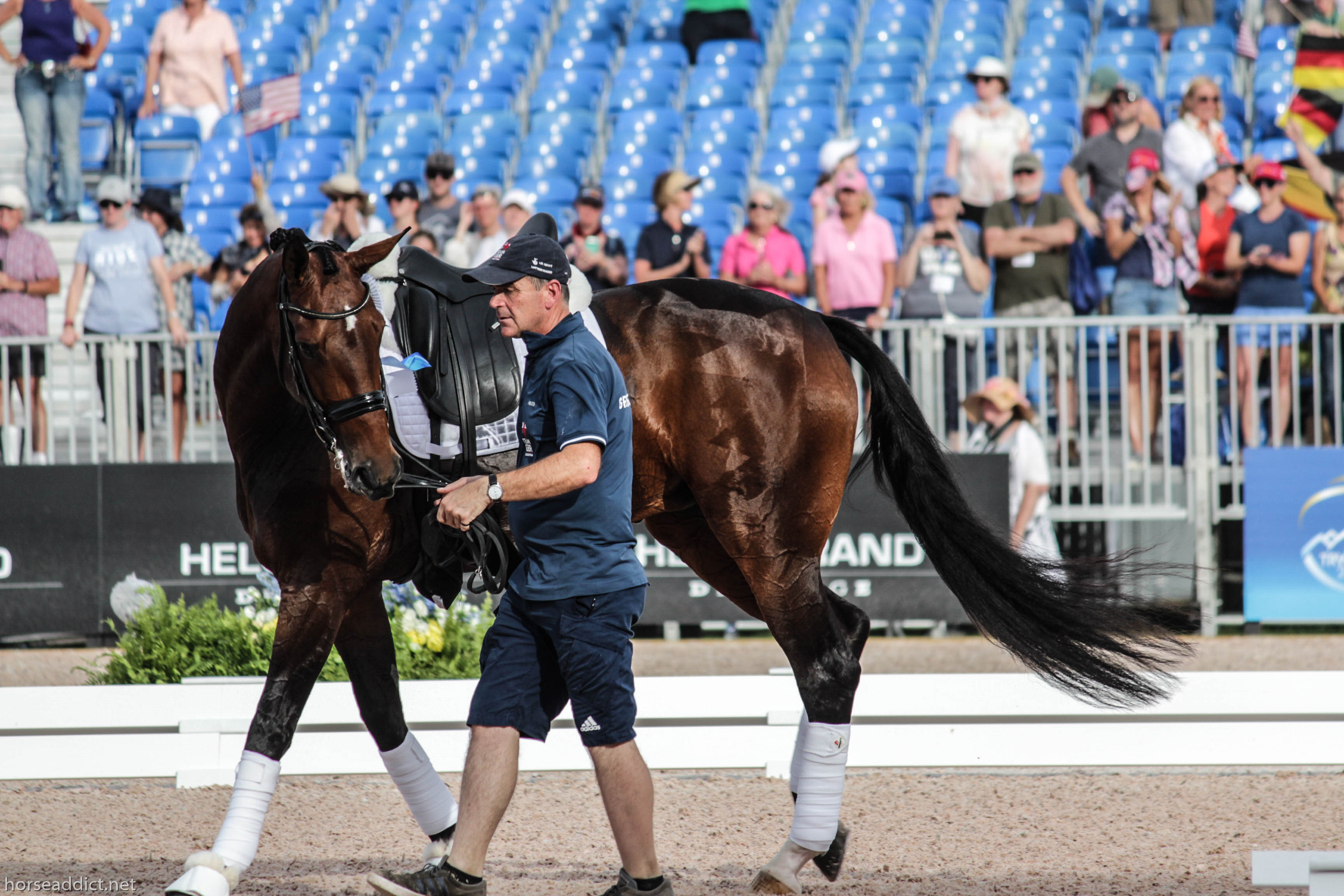 The photo above is of Alan Davies and Freestyle the horse of Charlotte Dujardin. Alan is possibly the best known and most decorated groom in the world. He will have established a relationship with the mare Freestyle at home in England as he knows he will need her trust at moments like this. Charlotte Dujardin knows the value of Alan and she speaks of it often. At WEG Tryon she had been given two of the Longines watches; one for the team event and British bronze medal and second one for her individual bronze medal. She gave one watch to Alan. Here is what she said: “it was a pleasure to give one to Alan to share the success, given how much Alan and grooms like him do behind the scenes for all of us riders.”

So I take my hat off and I salute the grooms. 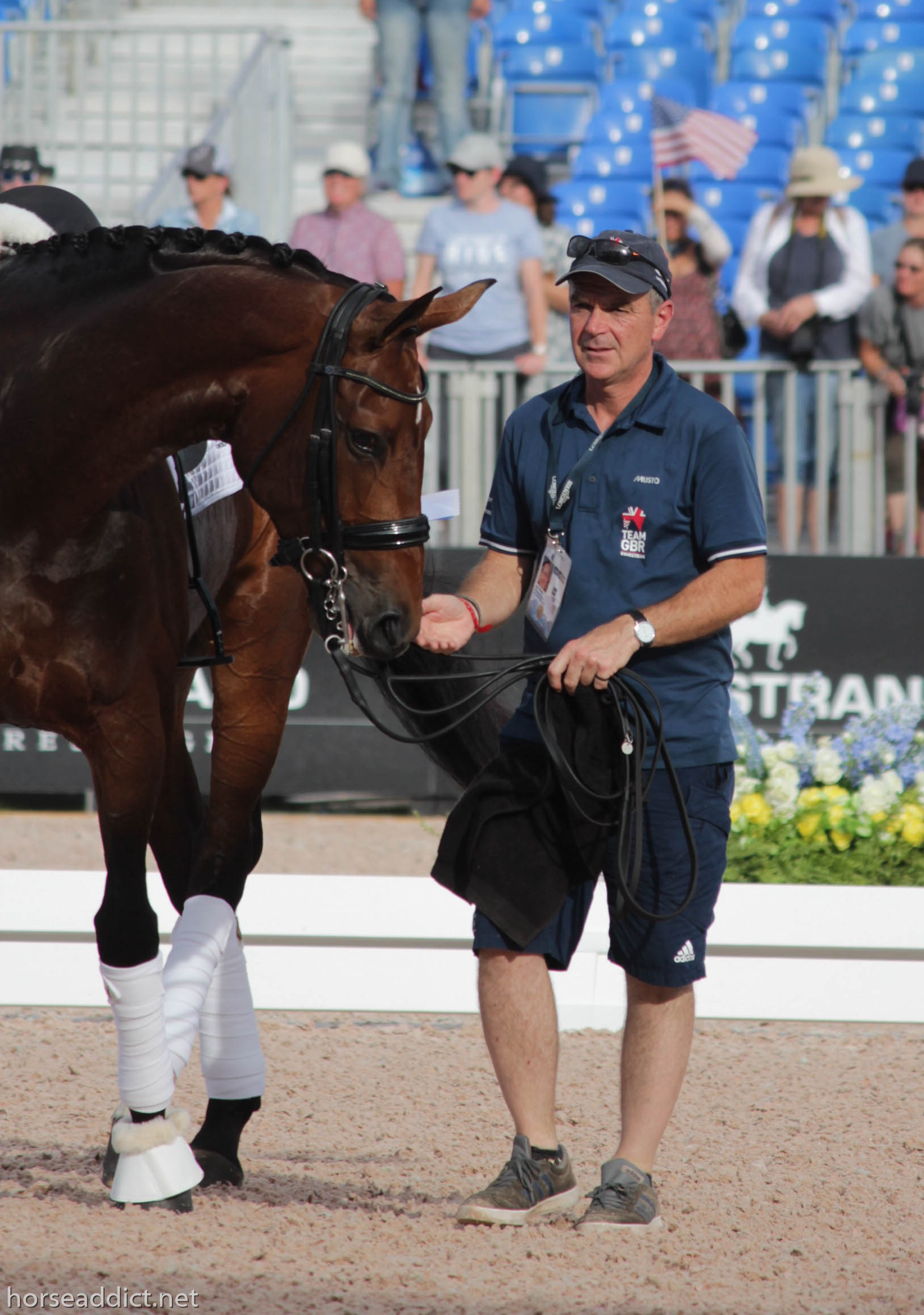 16 responses to “The Unsung Heroes.”