Wellington, Florida is arguably the Mecca for dressage riders, both professional and amateur ,during the winter season.  Here is the lineup for the 2017 season: the Adequan Global Dressage Festival hosts no less than 7 CDI (Concours Dressage International) competitions including CDI W (World Cup qualifier), CDI 5*, 4*,3*,1* and a CDIO 3*, all of these will be run concurrent with National Level shows and over at White Fences Equestrian in Loxahatchee there will be 4 National level shows.

But it was not always like this.  There was a time when there was little dressage competition in Florida and I believe that there is one person who can be credited with helping to get the ball rolling. That person is Janne Rumbough.

Janne was born in Denmark and her first love was ballet. At 11 she was accepted into the Royal Danish Ballet School but a family decision meant she did not follow that path.
“I hung my ballet shoes up on the wall of my room and walked over to the stables.” Janne told me. Her family had leased out stables on their property to a riding school and that is where Janne began her journey with horses.  “I spent four years riding with no stirrups. And that has saved my life many times since.” She actually told me this with a laugh!

“After school, I helped with the polio children who came to ride. They took off their braces and got onto the ponies. After one or two years of the riding some of them were able to walk without their braces.”

A reward for Janne was that she could ride and school the ponies. She also jumped the ponies and that started her onto jumping competitions. Later on in her life,while riding a borrowed horse, she won the Danish Jumper Championship.

When she finished school she continued her education in the US and was not riding at that time. She married a Swedish American who had been born in Panama and the gypsy phase of Janne’s life started. And she returned to riding. She had Thoroughbreds off the track and did both jumping and dressage. She had two children, and spent some time living with her family in Panama. While there she competed as a jumper and as you can see from the photo she had no fear of heights! 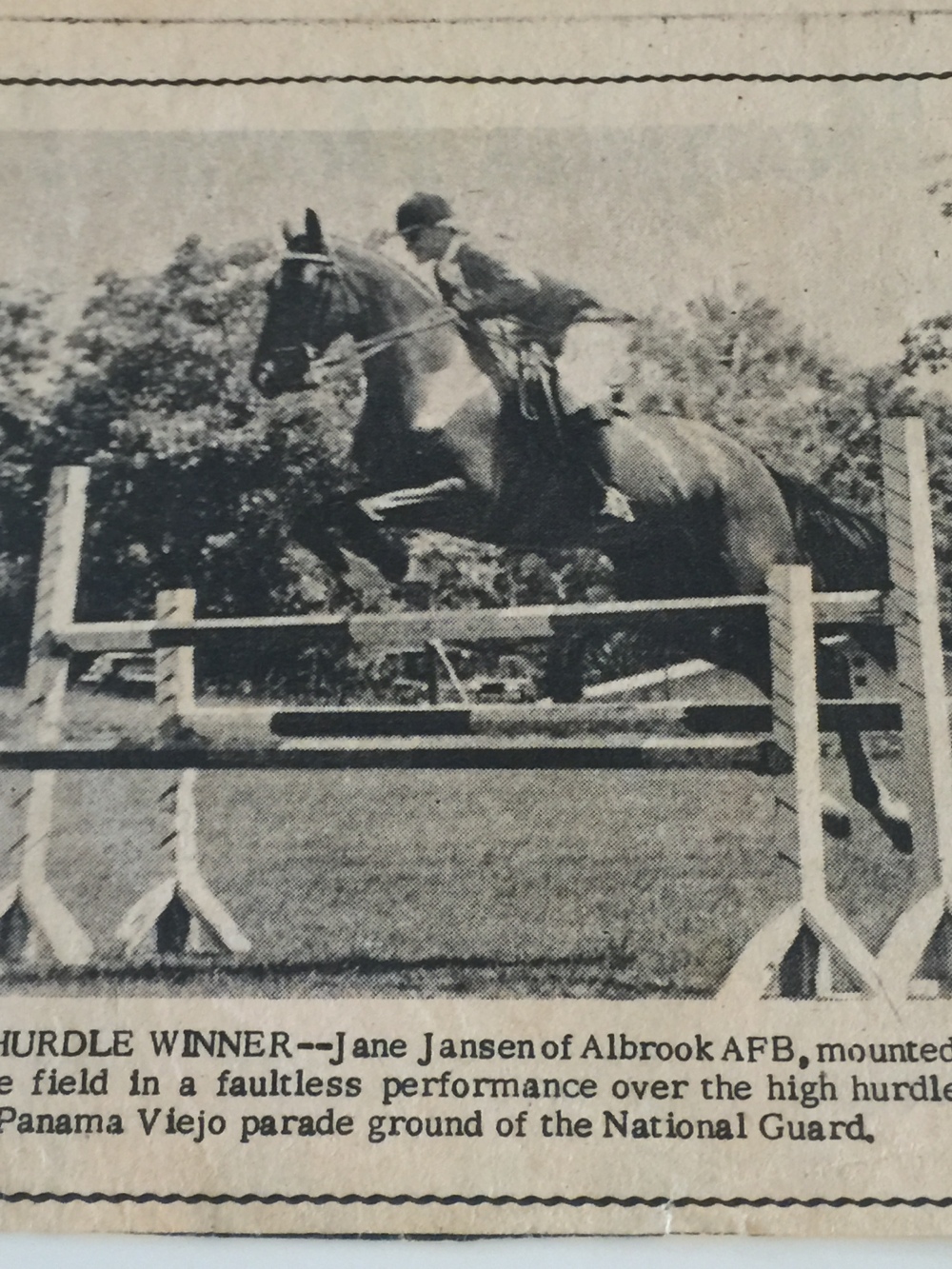 She returned with her family to  Florida, and then to England for five years. During the time in England her marriage ended and she returned again to Florida and made her home in West Palm Beach.

This was the beginning of her serious involvement in dressage. She instigated a circuit of dressage shows in different cities in Florida. Prior to this, there had been nothing at all in terms of dressage shows. Then, in 1984, she was instrumental in launching the first Palm Beach Derby at White Fences. “We had nothing.” she said. “We had to go to the hardware store to get white plastic chains to hang between the letters and make the dressage ring.” Robert Dover won the first Palm Beach Derby. He went on to represent the US in the Olympics and World Cup competition and is now the US Team Coach. The Derby is the longest standing CDI in Florida and one of the longest running CDIs in the US and Janne was its founding creator.

Janne remarried and told me that, Stan Rumbough, her second husband is very supportive of her riding and involvement with horses. “But he never comes to watch me unless I am riding at Devon.” (the ‘Dressage at Devon’ show in Pennsylvania) But there is one thing that he did for Janne that brought about a major turning point in her life.  A horse dealer would often phone her and ask if she was interested in a one of the horses he had for sale. Finally, Stan asked her who was making these calls. She told him and he said: “Well why don’t you look at the horse he is telling you about?”

Turns out this was an Andalusian horse. Janne had not ridden or even been interested in Andalusian horses before. “ I don’t want any of those.” She said. “Just let him send you the video,” was Stan’s reply.

The video was sent: Spanish rider Juan Matute on a very talented young stallion called Gaucho III. Stan reserved a flight and a hotel for Janne and said: “Go and try him.”

Janne told the people in Spain she wanted to see the horse, dirty and ungroomed in the stall, not all primped up ready to be shown off.  She walked up to Gaucho’s stall. “First thing, he looks at me, and he nickers at me.”  Once he was groomed and tacked up she got on to ride him. “It was like I had ridden him for a long time.”

While she was in Spain her horse in Florida colicked and had to have surgery. Her husband Stan knew this would mean the horse would be unable to work for quite some time.  He arranged to buy Gaucho.  Many people over the years have asked Janne what she paid for Gaucho. She tells them: “Call my husband and ask him how much he paid for my present.”  And what a present it was! That was the beginning of 19 years together. Gaucho died just last year (2016).

When she brought him back to Florida she decided to bring the Spanish rider Juan Matute over from Spain to help her.  “I needed help to learn how to ride this Andalusian.” She would bring Juan over to help her with Gaucho and arranged clinics for him so people could get to know him. Juan Matute later moved to Florida and brought his family with him.

Gaucho sired Janne’s current Grand Prix horse Junior. But she did not find him as easy a horse as Gaucho. Gaucho was a proud horse in the ring who would give 110% but Junior was a horse that needed more convincing.

Now Janne is also riding and competing at the small tour (Prix St. George and Intermediare 1) level with another Andalusian, Armas Zumbel.

Last year they won the Championship in the Adult Amateur division of the Region 3 Intermediare 1 and were Reserve Champions in the Prix St. George. This year they have qualified to compete in the US Championships at Gladstone in May 2017. They are ranked 18th in the US Dressage Federation rankings.  Not too shabby for a more mature rider.

Did I mention that Janne is 73 years old?  Well I mention it now because she told me she is “proud of it.”  And so she should be. I told her I was proud to be turning 68 in June. What was her reply? “Well, I’m always going to be ahead of you.”  We both laughed.

In 2016 Janne was the inaugural recipient of the USDF Member of Distinction Award. This award is given to one USDF member who has “demonstrated exceptional commitment to his or her local area or region.”

In 2007 she was featured on the cover of The Chronicle of the Horse, Adult Amateur issue on her horse Triumphador.

She is a USDF Bronze, Silver and Gold medalist.

She has Master’s Challenge awards at all levels.

She has competed in over 1,300 dressage tests on 20 horses spanning 25 years of competition.

She owns and has sponsored several top horses competed by dressage professionals both nationally and internationally including Olympian Mikaela Gundersen and her mount My Lady.

During the time I spent with Janne we discussed many things including politics and human rights. It is my personal belief that if Janne had chosen to go into the legal profession she would now be on the Supreme Court and she would be more than capable of standing her ground to defend her principles under any circumstances. But I think I speak for all dressage riders when I say I am glad she chose horses and chose to throw her energy and single mindedness behind dressage in Florida.

Janne has been an inspiration for me during the years I have been coming to Florida for the winter season. When I see her, I see a highly-accomplished rider and trainer, an amateur rider who is able to hold her own at the top level of competition, and she’s not in her twenties. If she can do it……so can I.