I don’t know if Dale Dedrick would describe herself as a warrior but having met her I certainly would.  Dale is like those toys with the weighted round base that no matter how often you knock them over they just come right back up.  But let me start at the beginning.

Dale was 12 when she started to ride. Her mother paid for 10 lessons.  “I was hooked,” she says.  Then her grandmother paid for 10 more lessons. That was the beginning. She worked weekends at the local stable, cleaning tack, grooming horses and ponies. And she was allowed to ride: “Anything we could catch.” So Dale and her friends would catch a horse or pony out in the paddock and leap on without a saddle or bridle. Later she moved on and bought a Thoroughbred off the track and taught him to jump and did the junior American Hunter classes.

“Then education caught up with me.” She went to medical school at the age of 19 and during that time she did not ride. But during her surgical residency she took it up again. “I was always happy when I rode so I decided I had to get back to that.”   She leased a Grand Prix dressage mare from Chuck Grant and he told her she could not show the mare lower than Grand Prix. So, what did Dale do? Well, she showed the mare Grand Prix!

“I went about learning the Grand Prix. I went to a show in Illinois and went into the ring never having done the 15 ones (changes of lead every stride). My goal was to go across the diagonal and move my legs 15 times.” She did it and the mare completed the 15 changes. “But I didn’t steer too well and ended up halfway down the long side. When I got to the judge I almost stopped and said:” I’ve just accomplished a miracle but I thought ‘nah’ I’ll ride the rest of the test.”

In 1983-84 she did the Grand Prix a few more times. And in 1986, when the mare was in foal, she found a Quarter horse trained to Prix St. George and rode him in the Olympic Festival in Texas for the North Team.

It was during her surgical residency that Dale was diagnosed with Lupus.  That was the end of the surgical residency but her hospital family saw to it that she would have some income and she was hired part time to work in the ER. In this way, she managed to finish her residency. But the Lupus got worse. She suffered two small strokes and then a bigger stroke left her with weakness in her right arm, left leg and vision impairment in one eye. She was told she must take two years off. Those two years expanded into a much longer time. “I’m still off,” she told me, with a wry smile.

Dale then spent some years struggling with poor health and was in and out of hospital.  On top of this she was run over by a car when a Senior driver backed up without looking and struck her down. The Lupus gained an upper hand and affected her heart and she had open heart surgery.  Following this, due to the Lupus and the medications she was on, she was bedridden and ballooned to 205 pounds.

“I had to learn to walk. I was very unhappy and I thought: “I should ride”. Dale got the weight off and started on a friend’s horse at the walk only. She also started to work with Roz Kinstler in 2007, who she had known and worked with in the 80’s. It was not long after that Dale was seen by Hope Hand who, at the time, was the president of the US Para-Equestrian Association.  “You should be a para rider.” Hope told her.

That was the beginning of Dale’s career as a para equestrian. Dale and Roz learned what would be required and the journey began. By 2011 Dale was confident that she was a good para rider.  She was in Florida for the winter. “My groom and I got two mugs that said: ‘On the road to London’ on them. So, we said: “We could go for London!”  And they did. Dale rode on Team USA in the London Paralympics.

“I had an amazing time. At first, it was a real eye opener to see the quality of the horses the British and the Europeans were riding. I was not prepared for that level of the riding and the magnificent horses. But as I watched them over time, I began to realize they were not unbeatable.  But I knew it would be hard work.”

Any hopes Dale may have had for the Paralympics in Rio were dashed by a return of health problems. In 2014 she learned that the heart valve she had was not functioning properly. It would need to be replaced. This would be the third open heart surgery for Dale. The surgeon gave her a 30% chance of mortality with the surgery.  In 2016 she suffered congestive heart failure and the chance had to be taken. Dale went back to her first cardio surgeon and he was optimistic. He lowered the chance of death to only 7%. In February 2016 Dale had the surgery. This time the valve was metal and would “last a lifetime” as Dale told me. But this meant she had to be on blood thinners and the surgeon forbade her to ride horses.

Did that stop her? No!  She told Roz she wanted to get back to riding as soon as she was able. Roz, at first, was unwilling to take the risk. Dale bargained with her. “I told Roz she could pick the horse for me.”  So, Roz went to look for a horse; safe, bombproof, but with good enough gaits and a 10 for temperament.

She found him. A 14.3 hand Buckskin pony. 50% Connemara 25% Thoroughbred 25% Percheron.  And 100% Right for Dale. They called him Suede. At one of her early rides Dale was walking him alongside the barn and someone accidentally threw a bucket of water out of a stall window and it hit Suede. He shook his head and trotted two steps and stopped. Another time, early in their relationship, gunshots rang out from a nearby farm, horses in the paddock bolted but Suede only twitched an ear. 100% the right horse for Dale.

This winter they started showing at White Fences Equestrian. There was a small spook in one test but he quickly recomposed himself. Then directly on to a CPEDI (International level competition) at the Adequan Global Dressage Festival. “Each test he got better and better.” Dale told me. She was very happy with him and also with the comment from a British para expert who told her he felt that Suede would be capable of being an international competitor.

Is Dale planning international competition with Suede?  What about the World Equestrian Games in Tryon NC next year?  “Why not?” is Dale’s response. “It is a long road ahead and the selection criteria have not been written at this point in time.” she says. But Dale has it in her sights. And in the meantime?

Well, when she gets home to Michigan, Dale will be competing in para reining competitions on a borrowed horse and also competing with Suede during the summer. “You’ve got to get out and show. You can’t learn to manage your emotions if you only train at home.”

“I’m not a good walker but I can ride. I have a scooter so I can get around but I don’t go to malls. I just shop on line. My other pastime is quilting. I can’t do it by hand but I do machine quilting. I love fabric and the pretty colors.”

I asked Dale how she keeps going and what could she say to others who are struggling with serious health issues. “Keep going. You don’t have a choice.”

And finally….. “God has something he wants me to do. I think I am doing it. “ 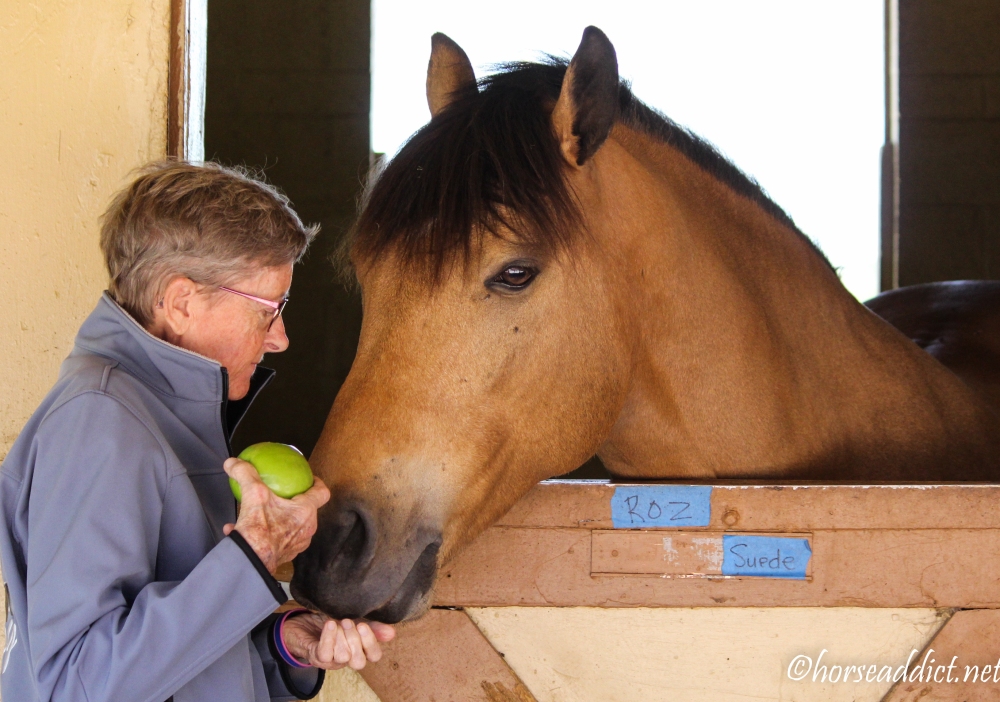