“Can’t you drive through?”

Although I usually blog about  horses this blog post has nothing to do with horses or riding. But it has everything to do with being in a tour group and reverting to schoolgirl behavior. The above exchange between Harriet the tour guide and the tour bus driver took place at the entrance to Arundel Castle last weekend. (September 16-17 2016). We were a group of 24 fairly senior (ages 60-75) people who were taking part in the Medieval Castles weekend organized by the Sloane Club in London.  David and I were the only Canadians and there was one other American couple.  The rest were all British and therefore very well behaved.

So there we were; unable to drive the coach in through the archway.

“We have passengers here with mobility issues,” Harriet moaned. “They can’t get up the hill to the castle.”

At this point our castle guide, Charles, said he would see what could be arranged. I had seen there were six seater golf carts just beside the archway and Charles had seen them as well.  In no time those who needed help were in the carts and the rest of us marched up the hill to the Castle. But Harriet was now flapping about a new issue. (Please try to read everything Harriet says with an English accent. It lends authenticity.)

“We’ll have coffee and then we must get on with the guided tour. The public will be coming through the castle later and we must get in front of them.”  Well, now the whip was out and prodding us along. Heaven forfend we mingle with the “public”.  “If anyone needs the washroom please go now. Now! I don’t want anyone holding us up.”  Harriet the Schoolmarm and Whipper-In.

I dutifully scuttled off to the washroom and drank my coffee P.D.Q.   But already a humorous little schoolgirl gremlin was stirring within.  The tour of the castle interior went off without a hitch. Then we had lunch. I sat down opposite Harriet and tucked into an excellent lunch.

“Wasn’t that quide ghastly? Quite the worst guide I have ever seen or heard,” Harriet proclaimed. She was referring to the Castle guide as Charles was not permitted to guide us inside the Castle.  I thought the castle guide had been fine. At one point someone had asked her if she found it a long season from spring to fall taking tour groups around the Castle. She had replied that she was “a bit tired” by this time in the season. Fair enough I thought.

“Well, it was simply dreadful when she said she was tired of taking us around.” Harriet carried on. I politely pointed out that the guide was referring to the length of the season and not to us on that one day. Well, I was put in my place. “Oh no. I don’t think so. She was talking about today. So rude. So dreadfully rude.”

At this point Harriet summoned a waitress and told her to start clearing the dishes. The waitress pointed out that two people were still eating. “Never mind that,” Harriet snapped. “They will just have to finish up we can’t wait for them. We have to be ready for the garden tour.”

Hup! Two, Three, Four! And off to the Gardens! I did not see Harriet while we were in the gardens but I did strike up a conspiratorial conversation with Ruth from Yorkshire. We both began to chuckle about ‘Headmistress Harriet’.

We had a pleasant afternoon touring the gardens, the Cathedral and the Fitzalan Chapel and then were herded onto our bus for the return to London.

“Are you going to take the A4?” Harriet the Inquisitor to the bus driver.  Oh…now she was going to tell the driver what his route should be.

When we arrived back in London and were tucking into sandwiches and tea Harriet announced that the next morning we were to assemble at 7:45 SHARP!  The bus would be leaving at 08 hundred hours and we had two castles to see and there could be no tardiness! No tardiness!

Ruth shot me a look and the two of us began to giggle.

Giggling is fatal really. Once it starts there is no containing it. The two of us were off and giggling and had to leave the room lest we be noticed.

Next morning David and I were up at 06 hundred hours, in for breakfast at 07 hundred hours and in the hall with our name tags on at 07:45. All 24 Castle Tourists were ready and accounted for.

But where was Harriet? “Where’s Harriet?” I asked Charles.

“She had to go home. She forgot her phone. She’s on her way back.” He told me.

We all went outside to get ready to board the bus. The bus…….was not to be seen. There was no bus.

Muttering broke out and people began to mill back and forth on the sidewalk. “Why is the bus not here?” “It’s already past 8 o’clock.” “Where is the bus?”

“Let’s all go back inside,” Charles said. “Harriet is on her way. It seems the bus got the wrong time and won’t be here till 8:30.”

Got the wrong time?

Once Harriet did arrive she was in spinning. It was Harriet Panickers now. “Quickly. On to the bus. Hurry along we’re late.” We were all shepherded onto the bus. The driver closed the door. We were about to pull away when…

“I think we should do a head count “Charles said and walked down the bus counting. “We are missing two people.” He said as he turned.

“I think it’s the Italians,” a voice came from the back.

Long story short the Italians were found. They had told Harriet they were going to go back up to their room and would be down again at 8:30. And they were. But by then we had all gone out to the bus. Seems Harriet Panickers had forgotten that.

En route to Leeds Castle, our first castle of the day, I watched Harriet. She had a plethora of papers in her large handbag. She kept pulling them out, folding and unfolding them, dropping them on the floor, picking them up, refolding them and putting them back in plastic cover sheets, taking them out again, dropping them and so on and on .  She was  just a gnats whisker away from flat out panic!

“Which way are you going? Have you got the castle in your GPS?” Harriet asked the driver. He replied that yes, he had and made it clear in his quiet tone that HE was the driver and SHE was a passenger.

We arrived at Leeds Castle and went to the restaurant for coffee. Once we were inside and seated and coffee was being poured into our cups Harriet stood up.

“If you have to use the washroom then please do it now. We have to be ready to start the guided tour in half an hour. “

Half an hour? Heck, I can drink a small cup of coffee and still have time to go to the washroom in half an hour. Now the Gremlin was emerging. I would NOT go to the washroom ‘now’. Nope! I would go when I felt like it after my coffee. And that is just what I did. And my gremlin suggested I go out by a different door so that I would be “missing” for a few minutes. (David knew where I was but he was sworn to secrecy.)

After our tour we returned to the restaurant for lunch. I sat with David and Ruth and her husband.  After we had finished eating I suddenly saw, out of the corner of my eye, Harriet lunging towards us. She swooped down upon us like a pterodactyl and snatched up two empty plates and my plate which had half a sandwich on it.

I looked at Ruth and the two of us dissolved. Giggling Gerties both of us.

We then went on to Hever Castle. Once again we were told to hurry along and to be mindful of the time and, and, and……

As Ruth and I walked along the pathway to Hever I spied an armoured vehicle that was part of a military display. It had a huge gun or cannon mounted on the front. I took Ruth’s arm.

“Oh dear, if anyone is late or misbehaves Harriet will have them gunned down with that thing.”

When we collected ourselves Ruth told me that Harriet had asked her and her husband if they would be interested in going on a trip to India that she was organizing.

Oh dear!  Harriet Panickers in India on a two week tour with a group. The papers flying. The washroom breaks rationed. Harriet’s stress level through the roof.  It was hard to imagine.

I have to say the castles were lovely, the gardens beautiful and the people in the group friendly and nice. I’m sure Harriet is a decent person and forgetting to pay for our guided tours and our lunches at two of the castles was an honest mistake. The guide, Charles, was very pleasant and well informed but he never actually got to ‘guide’ us as the castles all had ‘in house’ guides.

Perhaps Charles was just there to make sure Harriet Panickers, Headmistress and Herder, did not spin out and whirl off into another galaxy. 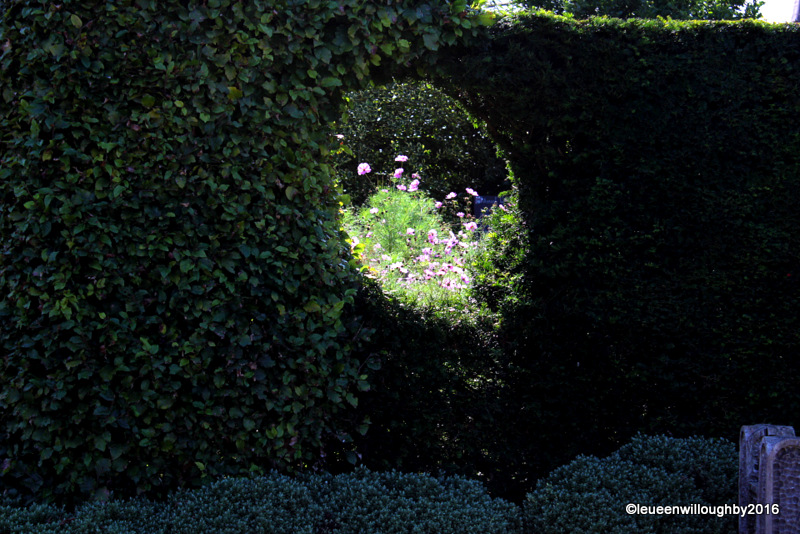