August 7, 2012.The Dressage Team gold medal on the line. The Grand Prix Special.  I was not able to get tickets to Greenwich Park despite my best efforts for the past year, so I took advantage of BT Live at Hyde Park. BT (British Telecom) took over a large section of Hyde Park and set up five big screens, showing the BBC broadcast of Olympic events. I had learned that one of the screens was going to show the dressage. 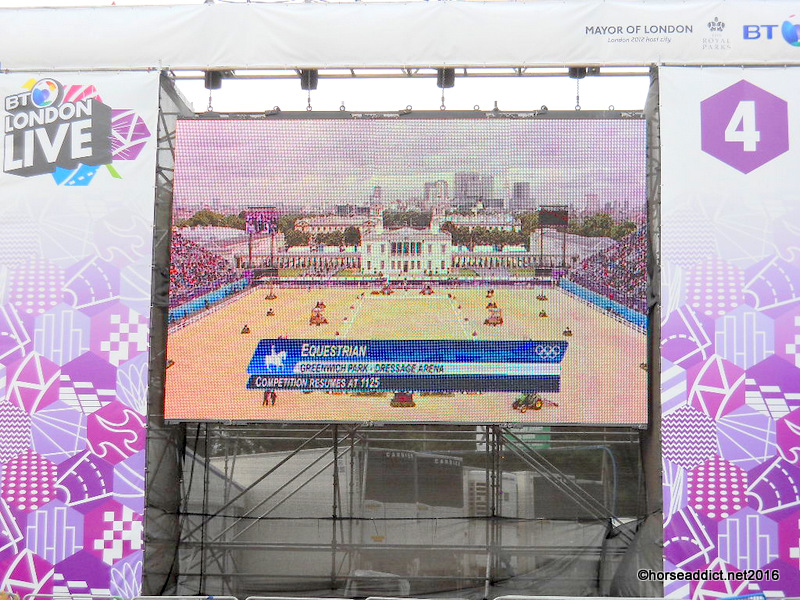 Well I thought it would be much more fun to see it in the midst of a crowd rather than sitting in our room watching the TV. I was right. The whole of London is buzzing with these Olympics and the tremendous success of the British athletes has only served to heighten the excitement and people were turning up in their thousands at Hyde Park.

Luckily for me the screen showing dressage had a collection of picnic tables in front of it. I was prepared to sit on the ground but was glad I didn’t have to. As we had arrived early David and I took our seats with a good view. 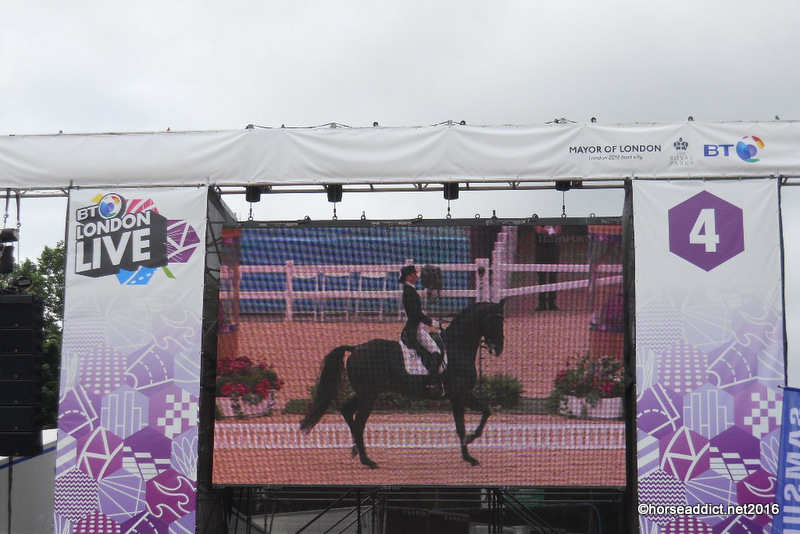 The BBC had Judy Harvey doing the commentary along with a BBC announcer. Judy’s commentary was informative which I’m sure helped as many of the people watching were not horse people although some certainly were and had come with flags (German, Danish, and Swedish) to cheer on their team riders.  As well as being informative Judy’s commentary was so sympathetic towards the horses. She seemed to know just how they were feeling in the arena and praised those riders who had a good connection with their equine partner.

Carl Hester was the first British team rider on Uthopia.  I held my breath. There had been a couple of small mistakes for the pair in the Grand Prix. There could be not mistakes now. And there were none! How skillfully Carl rode Uthopia showing off the superb extended trot to receive 10’s from the judges. I had a tense moment as they headed into the ones as there have been mistakes with the ones before. I need not have worried. At the halt cheers went up in Greenwich and in Hyde Park.  80.57

The BBC announcer had made it clear to all of us, in case we did not know, that the Germans were the biggest threat to the British. Their next rider was Kristina Sprehe on Desperados. The Grand Prix Special has a lot of passage and today the passage was not Desperados strong point. He seemed a bit unsettled and at one point took a gazelle like leap onto the diagonal. Judy Harvey reminded us he was a stallion and perhaps he was working to his own “union rules” today. Their score was 76.254.

Next in was the second British Team rider, Laura Bectolsheimer. Mistral Hjoris and Laura showed us their wonderful piaffe and passage. Then the canter tour. A mistake in the ones!  Ah!  The German woman next to me gleefully cried out to her friends:” A mistake, a mistake das is good!!” I nearly slapped her but I remembered the Olympic spirit is one of peace so I refrained from doing her an injury! Charlotte and Alf performed the second set of ones without fault and their final score was 77.794

Helen Langehanenberg was the last German team rider on Damon Hill. At the start of the trot tour the pair was scoring 81%. But then a bump in the transition from piaffe to passage lowered the running score.  Her final score was 78.936

The final British rider Charlotte Dujardin came in right after Helen Langehanenberg on the wondrous Valegro. What a pair! Charlotte was riding a somewhat conservative test. I felt that she knew that the team medal was resting on her ride and this was not the moment to go for broke and have a mistake. This was a sensible ride for the team. But what a ride it was! At the final halt the Union Jacks were waving and the spectators were cheering in Hyde Park and in Greenwich. 83.286!

That was it. The gold was won by the Brits!  There were still two riders to go but the German ladies packed up and left at this point.

I think it is worth noting that a mere four years ago in Hong Kong scores in the 70’s would be good enough for medals. Now dressage has entered another world. The standard of horses and riding is now very high. I do not feel that the marks were inflated. This is a new standard of competition in this discipline.

Gold for the Brits!  Their first medal ever in dressage and they make it a gold one and they do it in London!  What a day!  Next up….the Freestyle and Individual medals.

*This blog post was originally written for Barnmice in 2012.