The call came in the middle of the night. The fire was approaching rapidly, the horses needed to get to safety, could she help and come with her truck and trailer? “Yes,” she said.

When she got to the farm she saw there were other volunteers there to move the horses but she knew that with the number of horses it would take many trips to get them all out. If the area came under a mandatory evacuation she might not be able to get back in again once she had taken out one trailer load of horses.  There were also two donkeys that needed to be evacuated. Did she say “No.I don’t take donkeys.” No she did not. She took every horse and every donkey she could and made trips back an forth until the dawn came up in the smoke filled sky.

The firefighter found the exhausted abandoned donkeys on the road. Did he say: “I’m here to help people. Donkeys don’t matter. ” No he did not. He stooped down to give them a bit of apple and helped to get them taken care of. 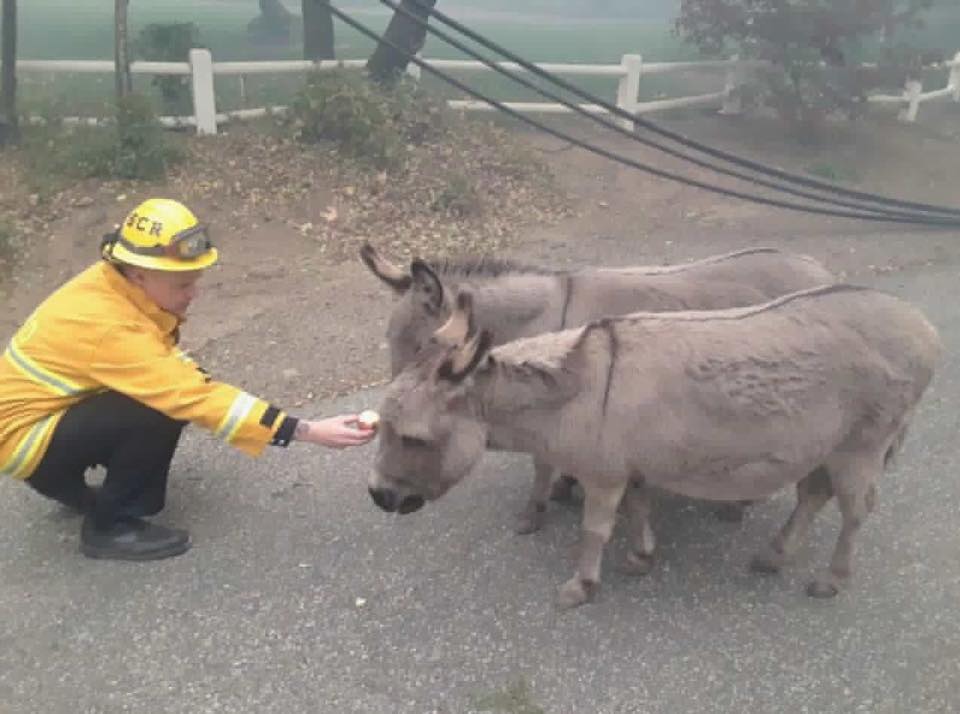 When the shelters were full did the owners of those farms put up barricades and say “No! we don’t want any more. They will have to go back.”  No, they did not. They took them all in and called friends to help. The friends came. Others opened their farms to take in more horses.

This morning a fellow blogger left a comment on my previous post about the fires in California and said that she hoped there would be some good news soon.

There is some good news amidst all this horror. The fires are now more contained. This will end.  And during all this humanity has shown its finest moments. No one said “No!” No one said: “Horses are  not worth it.” No one said:  “I don’t want donkeys. Let them burn.” No one said.  “We don’t want more horses here. Go away.”

The firefighters, the police, the animal control workers and the hundreds of volunteers all came out and tirelessly worked to save as many horses, donkeys and other animals as they could.  In a world where the news is constantly filled with stories about children starving to death in war zones, people displaced because of persecution, politicians grasping for the spotlight with no regard for the welfare of the human beings they represent, it is hard to not become cynical. But these fires have shown humanity at its best. In the midst of this tragedy so many came to aid those in need. And they did it without question. They came out to help. None of them said “No.”

If you want to help with a donation the US Equestrian Disaster Relief Fund can take a donation here.  https://www.usef.org/donate

Or The Brooke is also accepting donations and will be helping in the long term with food and care for the displaced horses.  https://www.brookeusa.org/california