The Sydney Olympics 2000. All the British horses; eventers, show jumpers and dressage,  52 in total, were flying home on a cargo plane. There was engine trouble. The plane had to land at Singapore and it was not able to continue. What to do with the 52 horses on board in the heat and humidity of Singapore?  Alan Davies, now travelling groom for two of the world’s top dressage riders, Carl Hester and Charlotte Dujardin, was with those horses and he  told me what happened next.

“The horses were all in crates with two horses in each crate”, Alan continued. “We were worried about how those 26 crates were going to be moved from one plane to the other across the hot tarmac. But another plane  was brought as close as possible and all the crates were transferred as quickly as possible. The only problem was that when the crates were put into the first plane we made sure that the stallions were in the middle and not able to get their heads out to the walkways which are on the sides of the plane. These walkways are very narrow and the last thing you want is a stallion leaning out and trying to bite you. But when the horses were all loaded onto the second plane all the stallions were facing out to the walkways. So we had to bend down as we went up and down the walkways to care for the horses.”  Alan said this with a smile.

“The other problem was the big container with water for all the horses that had to be moved as well from the first plane. And they had to do it without any water spilling as that could cause electric shock if it got onto any of the plane’s electric circuits.”

I interviewed Alan at the end of May this spring at Carl Hester’s yard.  I asked him if he was ever nervous when travelling with horses and shipping them around the world.

“A lot of people have asked me if I was nervous transporting Valegro, the  most famous dressage horse in the world and I would say “no”. The reason I’m not nervous is that I’ve been doing this for so many years and after experiences like the one in Singapore I am not nervous at all now. ”

When I spoke with Alan I asked him what goes into preparing the  horses for travelling to the World Equestrian Games (WEG) at the Tryon Equestrian Center in the USA this September. He told me that preparation had already started. 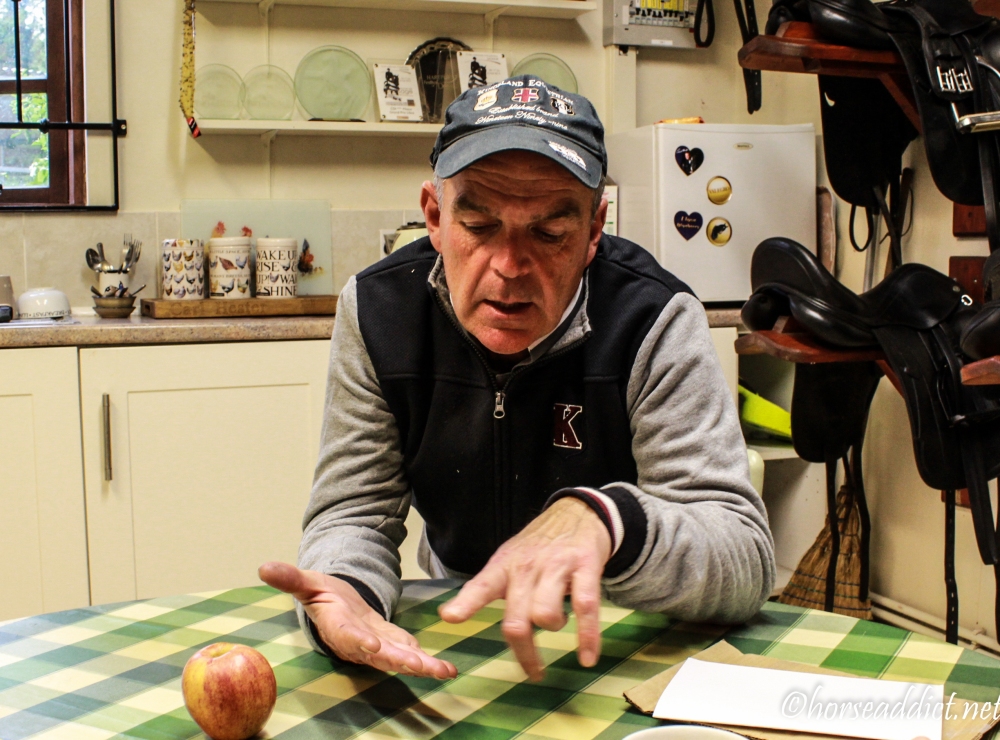 “Packing lists have to be made months in advance. I can’t take all the spares with me that I would like so I have to plan very carefully. We have to know all the US Argiculture regulations and requirements as well. We’ve already discussed the vaccination program for all the horses who have declared for WEG. Blood work has to be done as well. ”

What about the feed for the horses?  I know that horses are susceptible to digestive upsets if their feed is changed.

“The horses are fed on Saracen feeds here,”Alan told me. “They have a sister company in the US so it is not necessary to take feed with us. But for the Olympics in Rio we had to send all the feed and it had to be shipped in a container two months before we went. Different countries have different rules and regulations about what you can bring in. For the USA the regulations are the same as for the FEI (International Equestrian Federation) so that’s OK for all the supplements the horses here get. ”

What are the things you have to be the most careful about? I asked.

“We have to be very careful about any creams and powders as there can be no steroids and that includes anything we might be using on ourselves such as hand creams. ”

How will the horses ship to the US and Tryon for the WEG?

“All the dressage horses will fly together. That is organized by Peden in Europe and the Dutta Corporation in the US. First we will travel four hours by horse van to get to Folkestone and then across the Channel to  Calais and on to Liège in Belgium.  We will stop overnight there and the next day the flight will go depart from Liège. There will be two horses in each crate on the plane.

What do you do before the trip to prepare the horses?

Do you wrap their legs or use shipping boots?

“I wrap their legs for travel. Once we get to Liège I will unwrap  overnight and then wrap again for the flight. ”

Have you had any other things you have had to do to prepare for a trip?

“When we took Carl’s horse Nip Tuck to the Olympics in Rio I had to prepare him beforehand. He is a very sensitive and nervous horse and also very big. I knew that he would have to duck his head down to get into the crate so I had to train him. I had to get him to trust me. ”

The British Dressage Team  for the World Equestrian Games 2018 has not been announced yet.  This year they have announced a “short list” and from that the team of four will be chosen. Two of the horses on that short list, Carl Hester’s Delicato and Charlotte Dujardin’s Mount St. John Freestyle, are in Alan’s care and he will be travelling with them and looking after them at the Championships.

“The riders may not see the horses for three or four days,” Alan told me. “But I am with them all the time. On our way to the championships I say to the horses “we’re off on another adventure!”

When I was at  Carl’s yard in Gloucestershire I had a few minutes to visit with some of he horses including Charlotte’s horse Freestyle.

This mare was such a sweetheart. She loved to be given a pat and rub behind her ears.  In September I hope to see her again at WEG.  Then it will be in the arena where she is a hugely impressive dressage superstar. But I will also remember the  gentle mare who liked to be made a fuss of.