I think that literally millions of people around the world now know the Windsor Greys.  They pulled the carriage with Harry and Meghan after their wedding.  Last week I visited the Royal Mews at Buckingham Palace. I learned that  Prince Harry had to ask permission from Her Majesty Queen Elizabeth to have the Windsor Greys pull the carriage. The greys usually only transport the Queen herself! On the day of my visit there were two of the greys there for visitors to see. 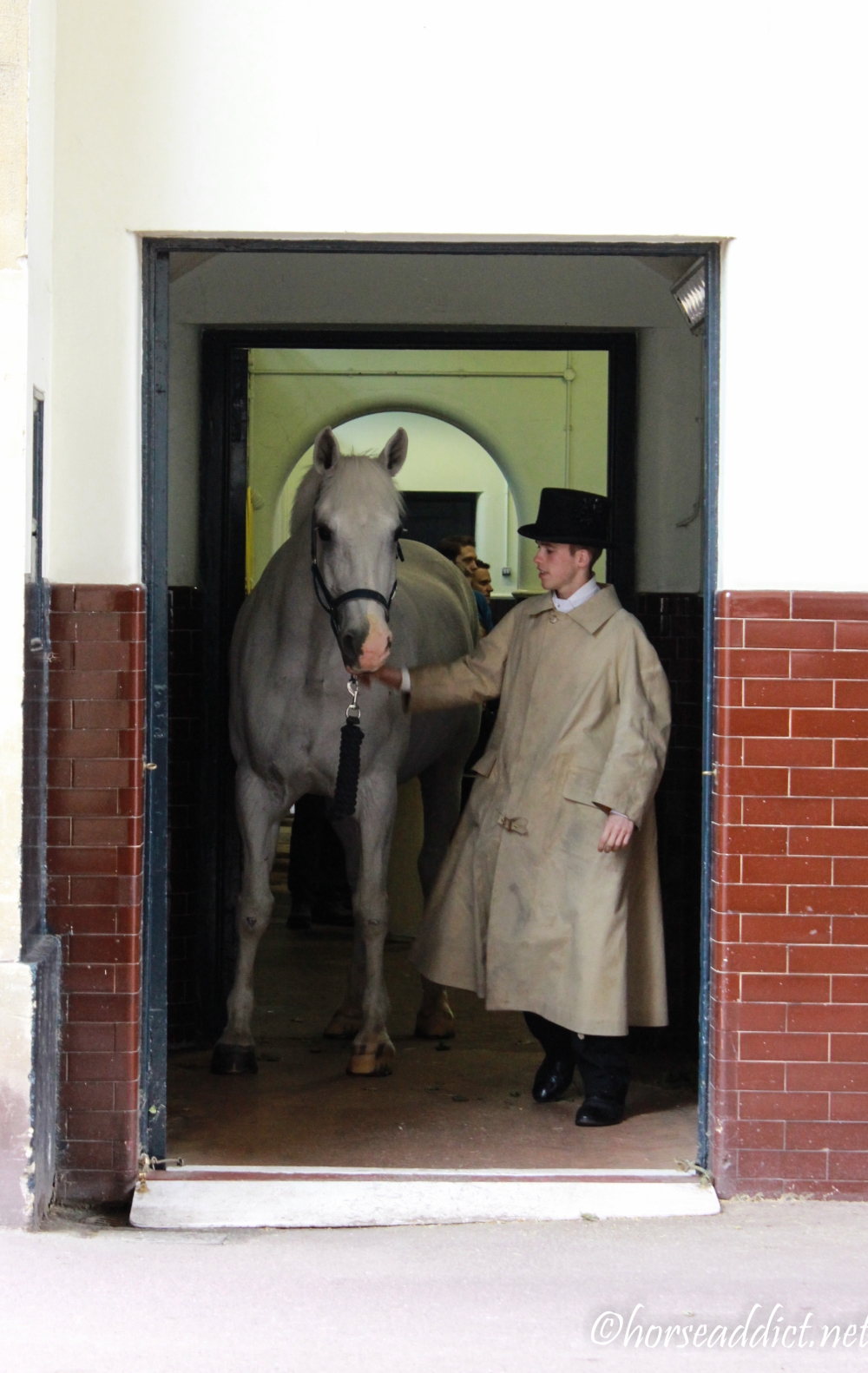 Luckily for me  one of the grooms was there to take one of the greys out to be ridden. He told me that the greys are Irish Draught breeding and the one he was taking out had an important job coming up later in June: pulling a carriage to transport the Queen at Royal Ascot.

There are also Cleveland Bays at the Royal Mews and while we had been waiting outside the Mews we had seen several of them come out both ridden and pulling  carriages to practice dealing with London’s traffic.  The Queen has taken an interest in the breeding of the Cleveland Bays and has restored the breed as it was in serious decline previously.

During the time we were inside the Royal Mews the Cleveland Bays and Windsor Greys, who had been out on the road, came back to the Mews.

There is also a riding arena for exercising the horses, which is thought to be designed by William Chambers, and dates from the 1760s. 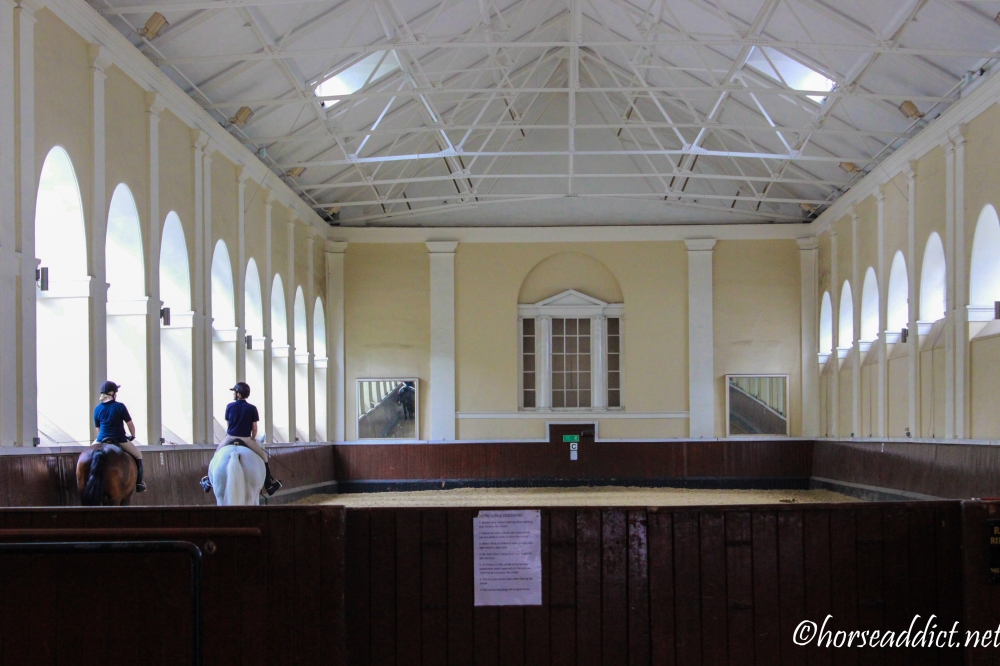 Just like other arenas the horses feet must be picked out on leaving the arena! 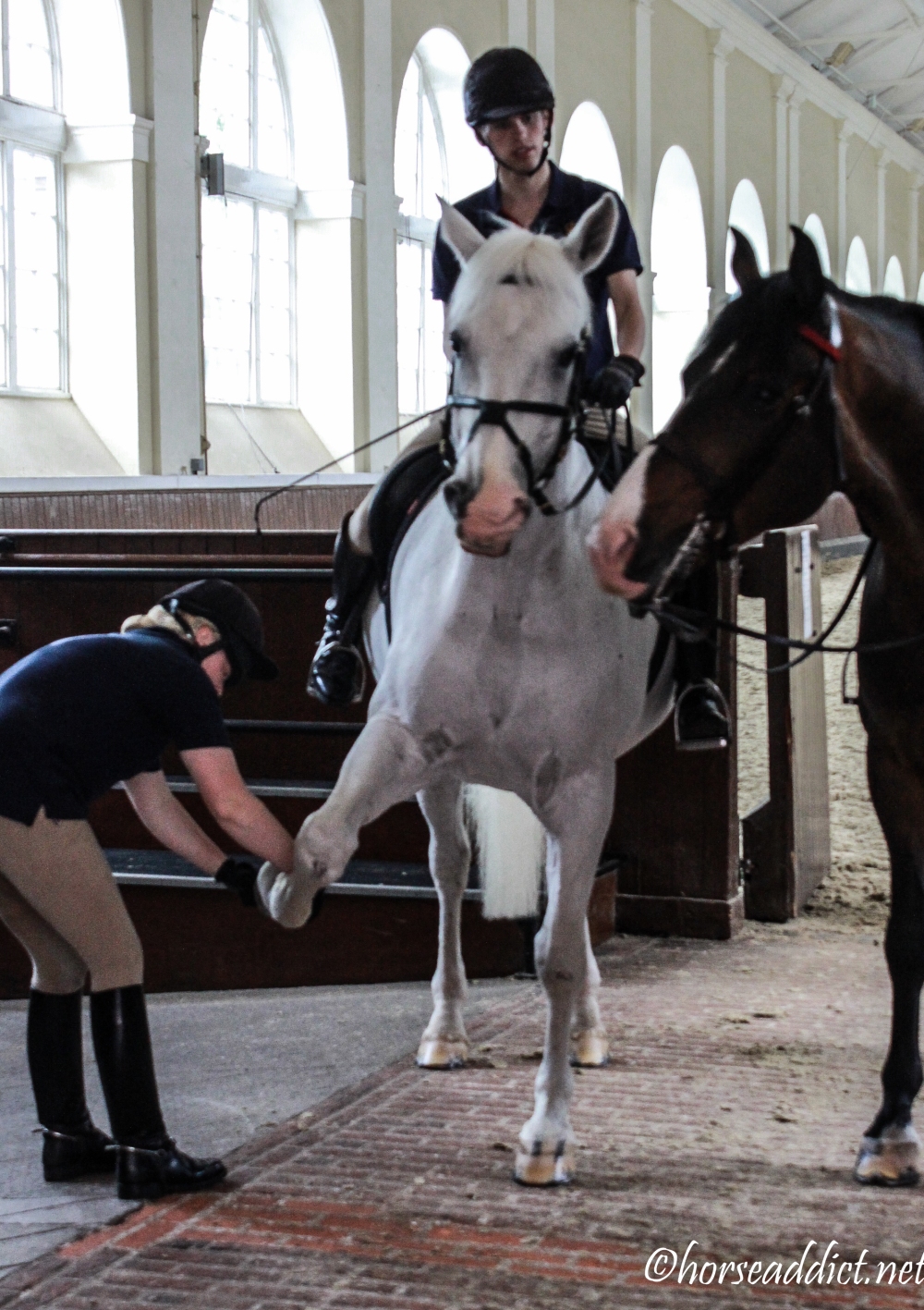 The greys may be “Royal ” horses but they are still horses and this grey decided to put the bay back in his place with a nip on the nose!

The Royal Mews is also the place where many of the Royal Carriages are stored. 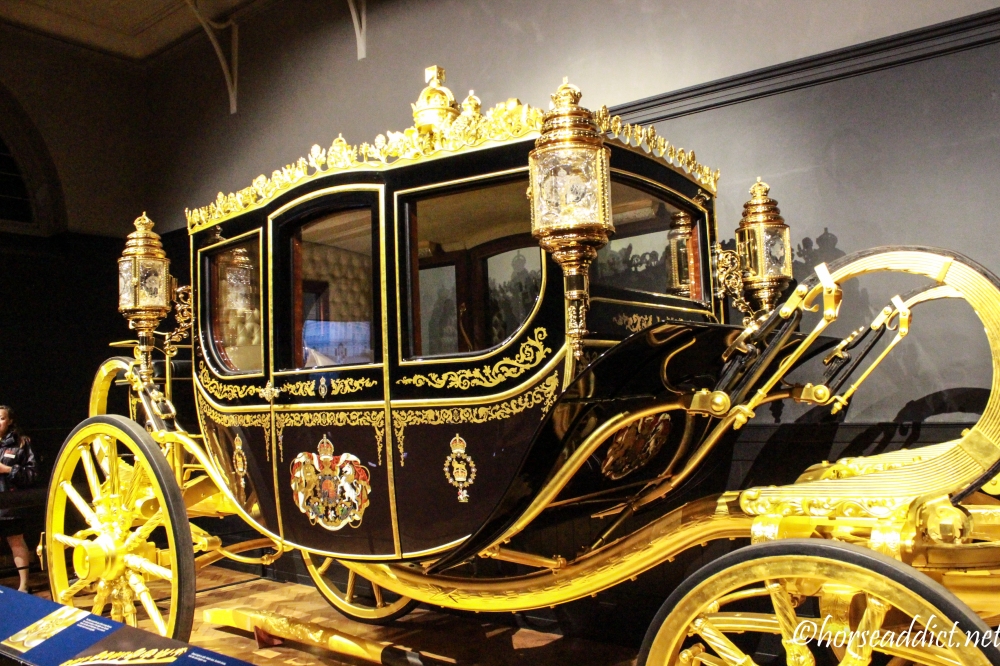 The photo above shows the Diamond Jubilee State Coach. This was built to celebrate The Queen’s Diamond Jubilee, this is the newest coach at the Mews. It is over 5m long, weighs over 3 tonnes and needs 6 horses to pull it. The crown at the top is not just decorative. It is the Royal equivalent of a “dash cam”.  It takes video while the coach is moving.

The photo below shows the coach that transports the Imperial State Crown to Westminster when the Queen opens the parliament. It is placed on the central cushion and travels with two escorts in the carriage.  Our guide told us it is also illuminated from above for the journey!

The coach below is often used for Royal weddings. On one occasion the bride was late in appearing and as the timing of the transport by horse and carriage to the church had been timed to the split second this lateness threw things into a bit of a panic! Who was the tardy bride?  Any guesses? In our group three of us (all women) guessed correctly. Leave a comment below if you can guess. Hint: the wedding was in the last century!

And last but certainly not least is the Gold State Coach. This coach is huge (7m long and 3m tall).  Commissioned by George III in 1762, it has been used at every coronation since that of George IV in 1821. It weighs  4 tonnes,  needs 8 horses to draw it and never moves faster than walking speed. Only the Windsor Greys are strong enough to pull this coach. There is a guard who walks behind the coach and has a handle to turn to engage the brakes. It takes 27 meters to bring this massive coach to a halt! 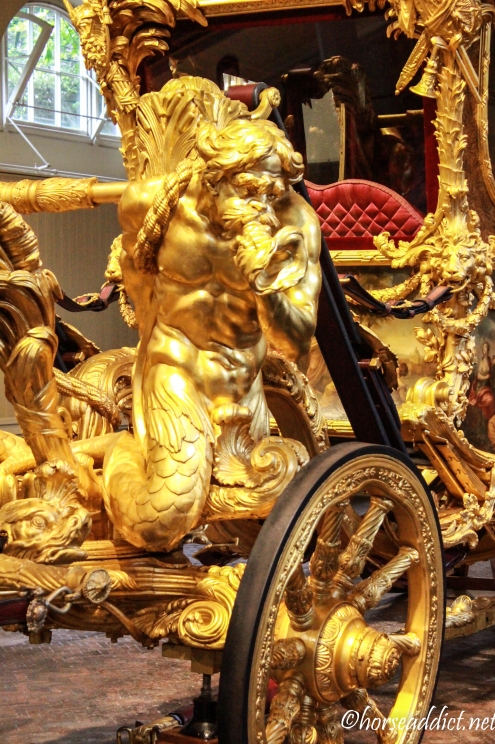 Even the horses have extraordinary harness as seen here on the model horses. 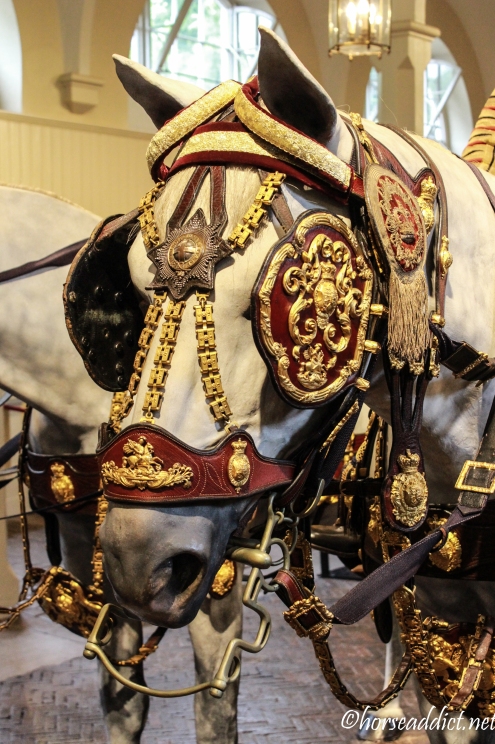 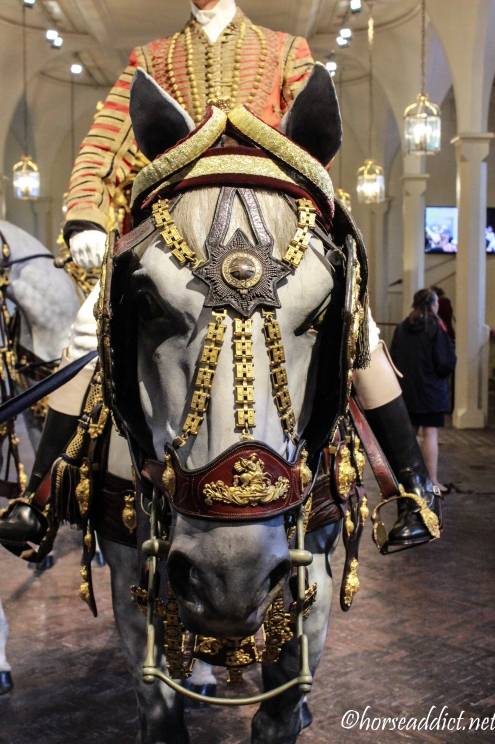 Our guide explained that the process of getting the carriage out of this display hall in the Mews takes two days!  A double door has to be opened at the side of the hall and the coach carefully positioned to go through the doors.  It is a delicate operation as the  clearance for the 12 foot high coach is only two inches!

The Royal Mews is worth seeing if you are in London. The guide was excellent, the displays are well laid out and easy to see and it is not too crowded.Another plus is that this is an entertaining visit for children and on the events calendar there are days when special children’s events are planned.

Don’t forget to comment if you know who the tardy bride was!!