“Biasini is….not too well.” Those are words no horse owner wants to hear.  “Not well” usually means that they have some level of colic. Colic is an intestinal upset that can, in some cases, require surgery and can be fatal. So to get that call from the barn last Monday afternoon was not good. My coach’s assistant Lynsey Rowan continued. “He didn’t eat his afternoon meal and he’s pawing and flipping his lip. He’s not in real distress but he’s not right.”

“Call Rob.” Was my reply.  Rob Remlinger is my vet.  I got in the car and drove to the barn. When I arrived Lynsey was walking Biasini. I took over. When Rob arrived he took Biasini’s vitals. All were within normal parameters. That was a good sign. He gave him a small dose of a pain reliever and I continued to walk him. Then Rob did a rectal exam and did not find anything too concerning.

For the next few hours I would walk Biasini for 10 minutes and then put him in his stall for 20 minutes. He seemed to be quite bright, was no longer exhibiting signs of discomfort even after the pain medication had worn off.  Rob advised that he could be given a small amount of hay to eat scattered on the floor of his stall.

I left the barn feeling confident that Biasini had a reaction to the long trip from Florida (30 hours) and the extreme change in weather from heat and humidity to temperatures around freezing and so much ice from a freezing rain storm that the horses were not able to be turned out.

The next morning the phone rang. “Biasini didn’t eat his breakfast and he’s pawing again.”  I got into my car and drove to the barn. Minutes after I arrived Rob was there as well. He checked vitals and again they were near normal. He did another rectal exam and did not find any displacement or blockage. But now Biasini was flipping his upper lip (a sign that the horse is in pain or discomfort) quite often and he had started to look ‘zoned out’.  We made the decision to send him to the large animal hospital at the Ontario Veterinary College in Guelph an hour and a half away. 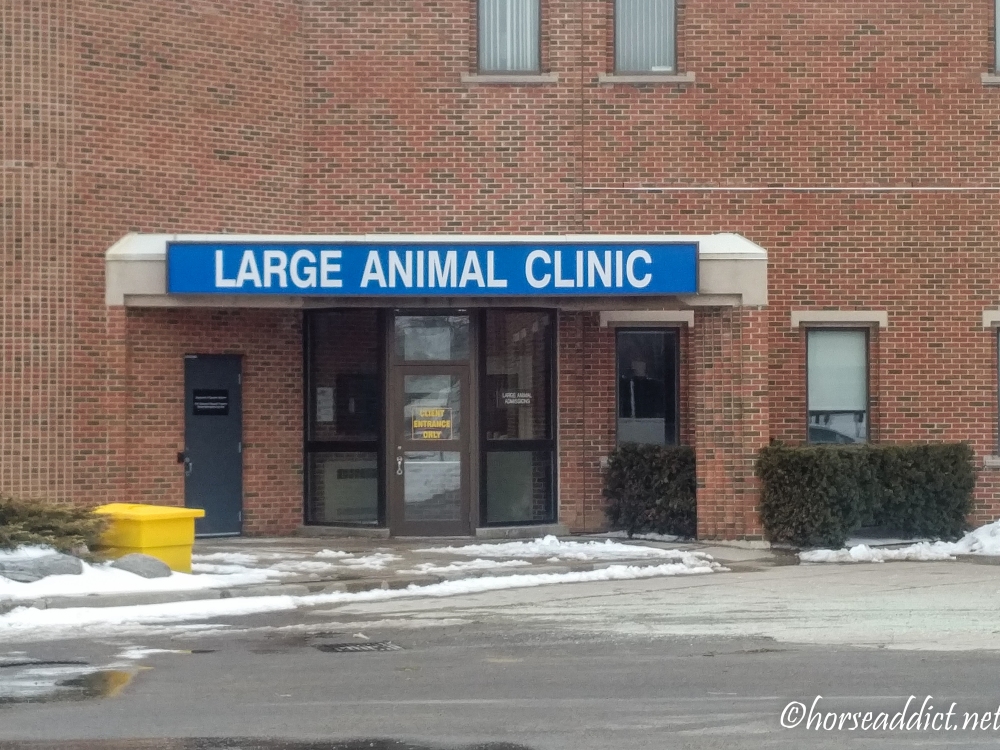 On arriving at the College he was taken into a room for colic evaluation.  The vet, Dr. Dustin Dennis,  introduced himself and he already had the information on Biasini as Rob had phoned in with the history.  A technician rolled in a portable ultrasound machine. Biasini was put into a restricted space so he could not move around too much and could not kick Dr. Dennis who did a rectal exam and ultrasound of his belly, and his lungs.   He told me that sometimes after a long transport horses can develop pneumonia and it presents as a colic. Biasini’s lungs were clear. The ultrasound also showed no blockage or impaction in his intestines.

But horses are very large animals and an ultrasound cannot see all of the intestinal area.

While this was being done the vet assistants  braided two parts of Biasini’s mane and tied an IV line onto his mane. Then they inserted an IV into his neck. Later when they put him into a stall, in the hospital ward, they would attach large bags of fluids to that line and hang the bags from the ceiling.  The line was expandable so Biasini could move around easily in the stall. Through the  IV line they could also administer any medications they felt he needed.

I went home and the text messages began to pour in. Friends,who had been at the barn when we left, asked how Biasini was doing. While I had been at the barn, they all knew what was happening. One friend had offered to drive me to the OVC if I was too upset to drive, another had silently come up and given me a hug.  They were all pulling for me and for my horse and asking if there was anything they could do to help. They are my Horse Tribe.  I called on a friend who is a Reiki Master who works with horses and asked her to help and send healing to Biasini. She responded immediately that she would. Another member of my Horse Tribe.

The next morning I got a call to say he was doing well overnight and had passed a large quantity of manure . The diagnosis was that he had passed an impaction or blockage. They were going to do a gastric scope to see if he had ulcers. Ulcers in a horse can cause them to display symptoms of colic so I had asked them to check this out.  When they had finished they called to tell me that he did have a couple of small pre-ulcers and a small ulcer. These were all just minor but would be helped by an acid blocking  medication to be taken for 28 days. I told them I would be down to visit him in the afternoon.My vet, Rob,  called and said he also had the update. This vet has been in my Horse Tribe for 15 years. 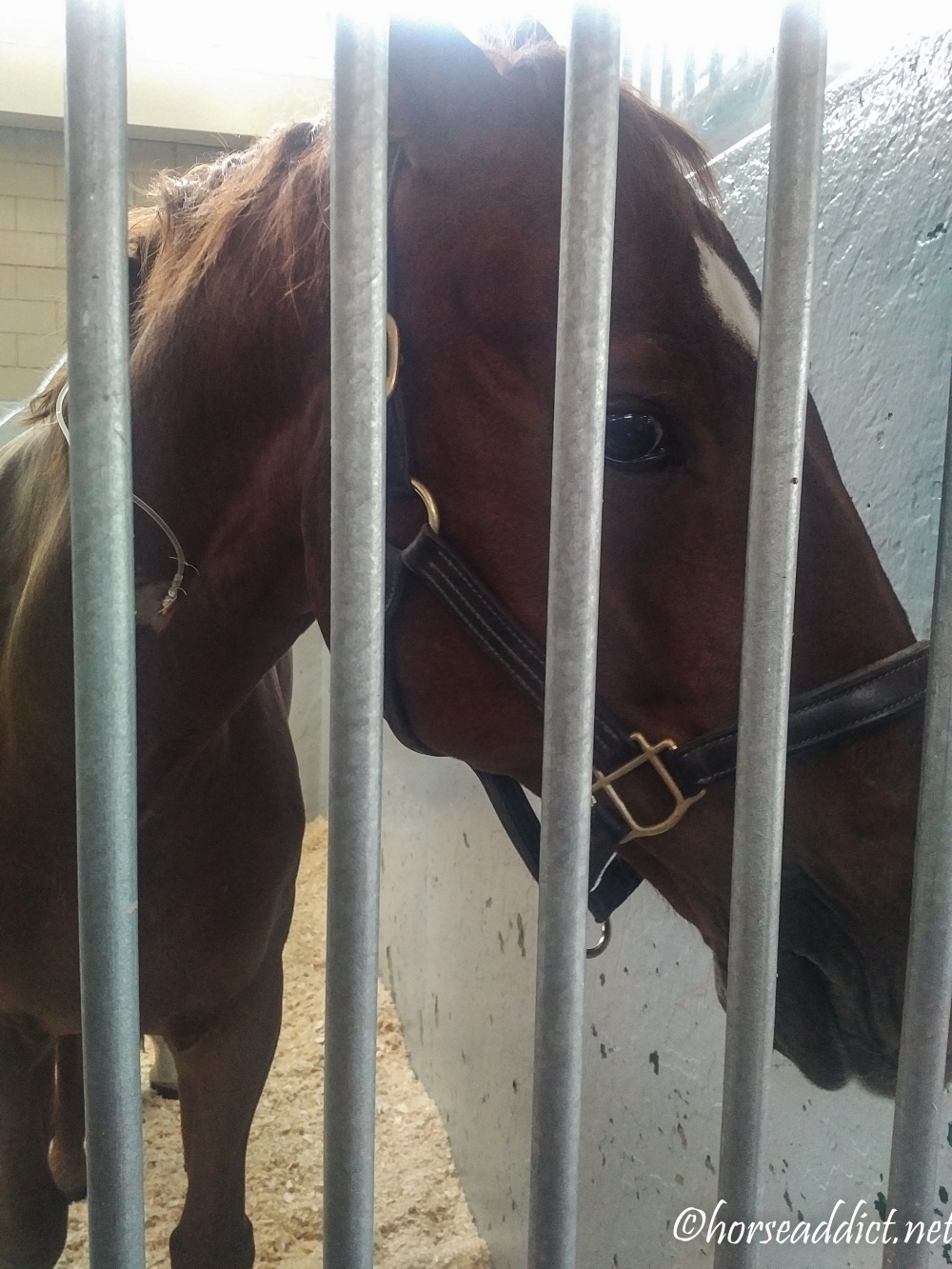 When I got to Biasini’s ward and looked into his stall he gave me a look that let me know he was very annoyed at being left there.  I went into his stall and gave him a rub down with a towel. He enjoyed that. Then as I left he started to nibble the wood shavings on the floor of the stall. 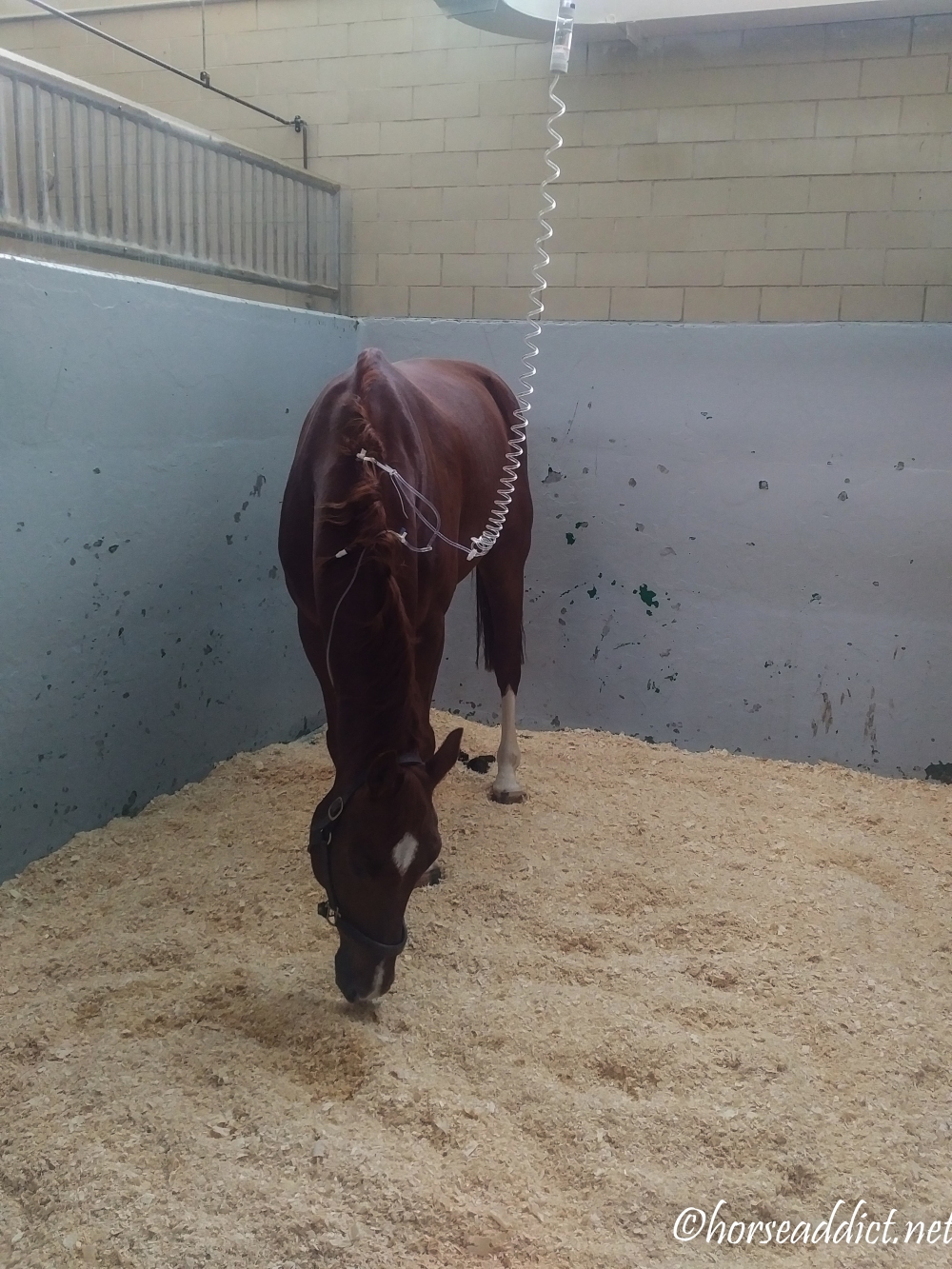 So I had to put on a muzzle to stop that. He gave me a look that said: “did you really have to put this thing on me?”

On my way out of the ward I felt sad that Biasini was there. But there were other horses in much more difficult situations. One  pony and two horses, who had bandaging on their middles, were recovering from colic surgery. Two others had bandaging on their legs from surgeries. There were also three mares and foals. I do not know why they were there but the little ones looked through the bars of the stalls with their big eyes and I hoped they would be going home soon.

Thursday they gave me an update that Biasini was doing well and they had begun to reintroduce food to him; a mash and small quantity of hay. After a colic this is a process that they take very slowly.

Today, Friday, Biasini was given the all clear to come home. I found him in his hospital stall looking bright and enjoying his hay. 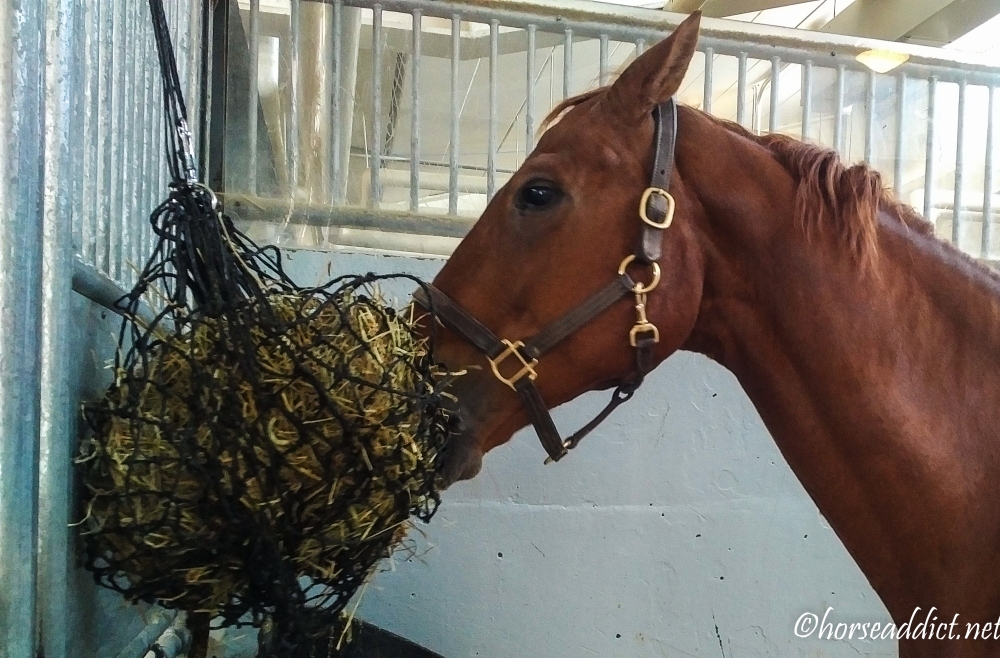 He is home now and for the weekend he will be on a diet of small quantities of hay and several feeds of soaked hay cubes. Monday we will start to gradually get him back onto his regular diet. That process will take 5-7 days.

I will continue to worry a bit until I have seen time pass and know that he is back to being 100%. But it would have been a very different experience without the support of my Horse Tribe. These are my barn friends, my coaches, my vet, the barn manager, the Reiki Master, they are all part of the Horse Tribe and I am so grateful for them all!