Hay Dear Humans!  I’m back in Florida with all my pals. I meet up with these guys every winter. So let me introduce you to two of my Florida pals.

Mesanto. He’s in the stall next to me this year. Last year he was across the aisle from me. He’s a cool guy. He lives here all year and he says it gets pretty hot in the summer but he doesn’t mind that. I wouldn’t mind it either. I like hot weather. I do NOT like the cold. And….. can I change the subject for a minute here?

It has been pretty darned cold, for Florida, the past week. The last two nights have been cold enough that my human Ma Leueen has had to put on my silver turnout blanket that I wear at home in Canada. She told me it has been down to almost freezing during the night and she’s right it has been cold! So I’m glad I have my warm blanket to wear. The thing is , here the barn is wide open. I can look out the back of my stall.

And out into the aisle as well. 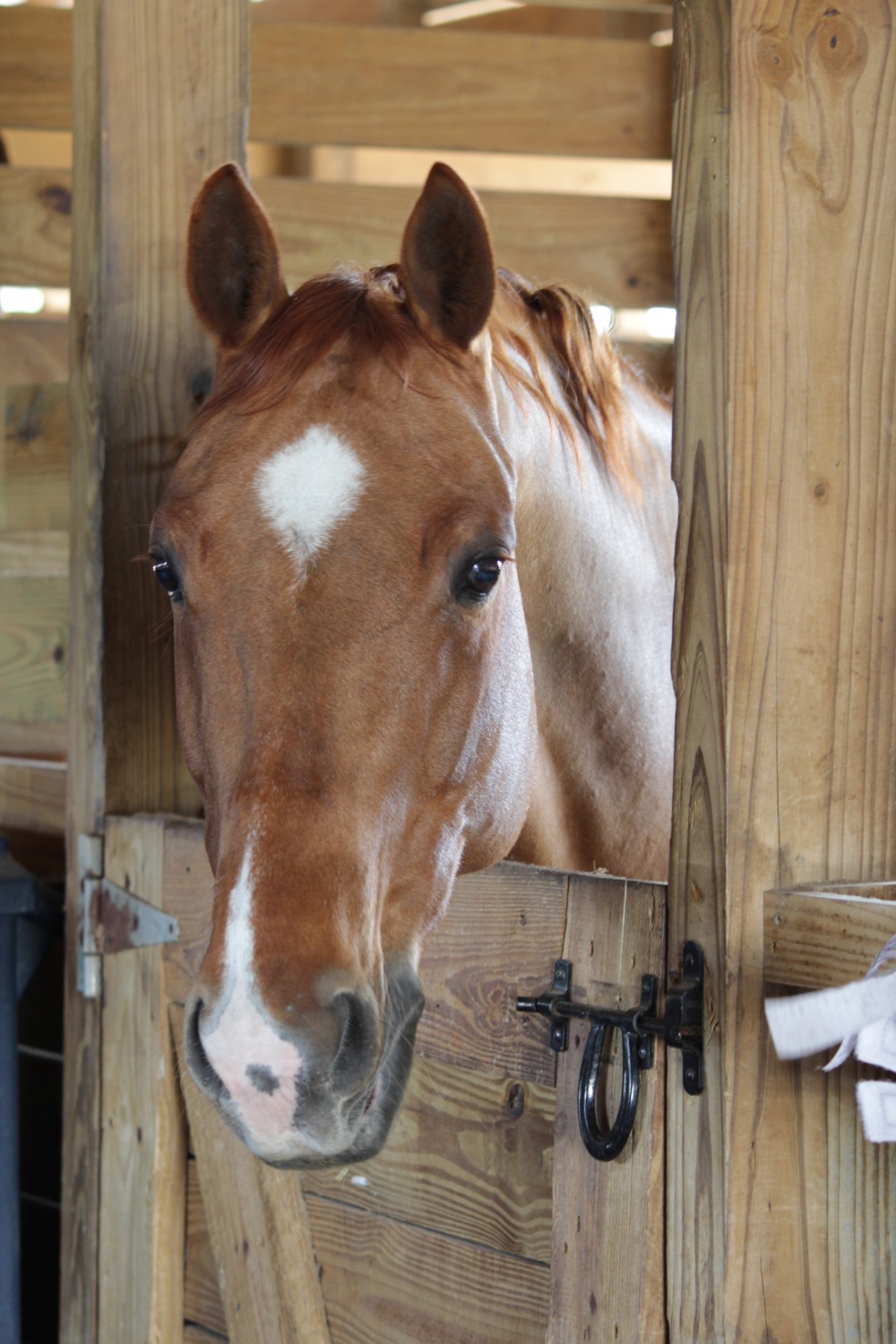 This is very nice for the warmer weather that is normal for Florida but this past week there has been a cold wind blowing  through . So, good to have a warm blanket.

Anyway…..back to my neighbor Mesanto. He’s in a much better mood this year than he was last year. He says  now he is getting a better turn out situation and he really likes the paddock he is in so he’s  happier. I get it. Turnout is important.

My other neighbor is Khan.  He comes here in the winter, from up north, just like I do . But not from Canada. He comes from someplace called Indy Anna.  Kahn is a very big fellow.  When humans see him they always say: “Oh my! What a big horse!”  He tells me he is sick of hearing that. He says humans always want to know how tall he is (he’s about 18 hands high which is….well….big!) and they comment on how big his head is and how big his feet are. He says he’s fed up with all that.  Beside him is a nice mare called Clementine. We horses just call her Clemmie.  She is very nice and she is a Shire horse, so she is HUGE.  But the humans all just say: “She’s so sweet”. That pisses Kahn off even more.  I’ve said  to him: “Just let it go mate. That’s humans for you.”

Here is a photo of Kahn and his human Ma Kleiner. He doesn’t look that big  but that’s because Ma Leueen was on me when she took the photo.  Kahn likes this photo ’cause he thinks he looks handsome. Which he does. Doesn’t he?

Kahn is a worrier. It’s kinda funny for such a big guy to be a worrier. He worries about loud noises ,anything that flaps, anything that looks suspicious.  I’ve asked him why he’s so worried and why he spooks at things when his human Ma Kleiner rides him. And you know what he said ? He said: “I have to look after Ma Kleiner because she  is so small.”

“What?” I said. “She’s not that small,she’s a professional rider and anyway, when Coach Belinda was riding me at home I never worried about looking after her and she’s way smaller than Ma Kleiner.”

“I have to look after Ma Kleiner. If I see something that’s not right I have to move quickly, get away from it and take her with me. I’m always on the lookout for suspicious things. I have to be on guard ALL the time.”

“That’s nuts,” I told him. ” I don’t spook anymore because Ma Leueen has to be on the lookout. She has to look after me. That’s her job. I have to pay attention to my job and to what I’m being asked to do. Even when we are out for a trail ride I just hand it over to Ma Leueen. You should do the same Khan mate.  It will take a lot of the stress out of your life. ”

Well, Kahn and I can’t agree about that but I really like him. He’s a great guy and a good neighbor to have for chats in the night time when all the humans have gone to sleep. ”