The journey of 2,300 Kilometers began this morning.  At -18 Celsius my car was reluctant to get into the mood and started up with a rattle like an old sewing  machine! But once she warmed up all was well.  My travel mascot George was happy to be getting out of the snow and cold. 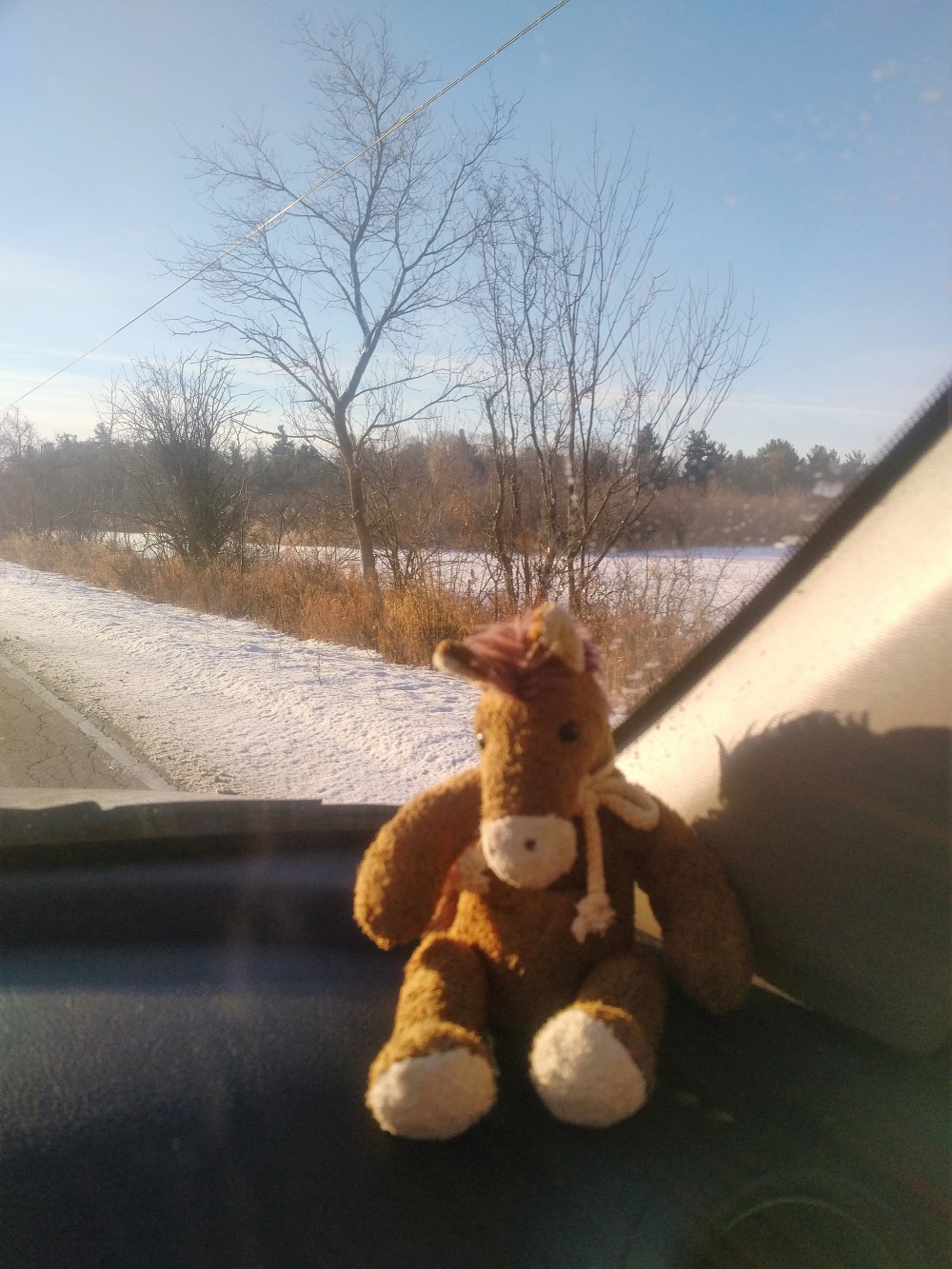 The day was cold but bright and clear.  But it turned out to be a looooong day. Here’s why.

We cross from Windsor, Ontario to Detroit, Michigan on the Ambassador Bridge. As soon as we got onto the bridge the traffic ground to a standstill.  It’s a long bridge and it was stop-go-stop-go. So I had time to take a photo out of my car window. Detroit is on the left of the photo. Detroit is somewhat down on it’s luck now but back in the day Detroit was in the glory days of the motors and the music. And yes, that white stuff on the river…that’s ice!

After about half an hour we made it across the bridge. At this point my husband, David, was directed to the right with his truck and I was directed to keep going straight ahead. I waved to him and that was the last we saw of each other for then next  hour. Take a look at the car in front of me in this photo; covered in salt from the roads and frozen muck. That’s pretty much what my car looks like too.

Once I got up to the customs and immigration officer it was plain sailing. He inspected my passport and asked where I was going. ” My final destination is Palm City Florida” I replied. He smiled asked if I had anything to declare and told me to have a good day!

The turning for the Interstate 75 South comes right after you pay the toll for the bridge (which is privately owned by an American family). As I was about to turn I saw a sign.  “I 75 SOUTH CLOSED TAKE I96 NORTH……”   and the rest of it I could not read.

Well ….the detour took me pretty much half way to Chicago. I love Chicago but that was NOT where I wanted to go today.  Once I was on the “detour” and could see on my GPS how long it was going to take to get back to the I75 I called David. Turns out he was just ahead of me. Finally after a tour of the country west of Detroit, we arrived at Munroe. This is out lunch stopping point every year.

Just before Dayton Ohio there was a slow down to stop-go-stop-go due to an accident. That was for about half an hour. By now I had heard the BBC radio program with Prince Harry interviewing Barack Obama for the second time. Loved it but…..

This time it was entering Cincinnati. There were still some police cars there but I think the major damage had been removed. This was only a 20 minute slow down.

We arrived at our hotel and fortunately I had my reservation  confirmation on my phone because they did not seem to have any record of me.  But since I could show the confirmation email on my phone they found us a room.  We schlepped in our overnight bags and also out little dog  Tia. She had her dinner while we went  across the road to Cracker Barrel for dinner.  Tomorrow I will try to get a photo of Tia. She travels in the truck with David and she is looking forward to warmer weather too. Here in Lexington is it only -9 Celsius.   The fellow at the hotel front dest said it always is this cold here in the winter. The waiter at Cracker Barrel said it never gets this cold. Hmm…..I believe him!

Today we travelled 1,000 kilometers.   Tomorrow on to Tennessee and Georgia!