“Then I saw heaven opened, and behold, a white horse! He who sat upon it is called Faithful and  True, and in righteousness he judges and makes war. His eyes are like a flame of fire and on his head are many diadems; and he has a name inscribed which no  one knows but himself. He is clad in a robe dipped in blood , and the name by which he is called is The Word of God.  And the armies of heaven, arrayed in fine linen, white and pure, followed him on white horses. From his mouth issues a sharp sword with which to smite the nations, and he  will rule them with a rod of iron; he will tread the wine press of fury of the wrath of God the Almighty. On his robe and on his thigh he has a name inscribed, King of kings, and Lord of lords. ”    Revelation 19 11-16 (KJV)

In September, when I was in England, I visited Salisbury Cathedral.  On the walls there was a special display of fourteen embroidered panels called “Threads through Revelation.”  These panels, 2.5 meters high and spanning 1-3 meters, have been created by textile artist Jacqui Parkinson . They explore one of the most enigmatic books of the bible ‘Revelation’.   Each panel has been created on a bedsheet bought in a second hand shop. Jacqui likes the  idea that this base for her creations has the dreams, the histories and the  DNA of the people who slept in those sheets and now they are part of the story.All of the panels are multi layered with painted dyes, layered silks, that are cut and frayed and metallic leather stitched on top.

There was one panel in particular that caught my eye and I photographed one section of it. 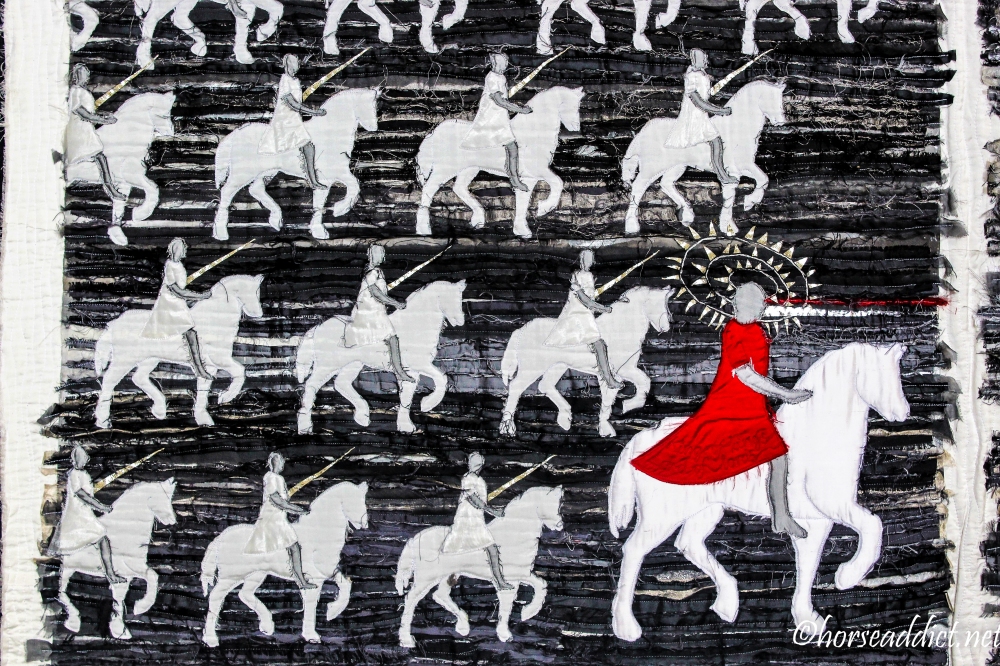 This scene struck me as very dramatic so I looked in Revelation to find the source of this image. Revelation 19 11-16 (KJV) is quoted above.