Hello again Dear Humans!  I’ve been having a pretty good week apart from a tricky thing that happened with one of my hooves.  My human, Ma Leueen ,was riding me in the indoor arena and we did some sideways walking as part of our warm up. I had an odd moment when I sort of stepped on the inside of my left front hoof.  No big deal. But…and it is a Big but…when I started to trot my left front hoof felt really weird. Not painful just all off balance.  We horses like to have out hooves nice and flat on the ground. Now I know that female humans wear very uneven shoes on their feet. Yes! I do know this! When I was at a show in Florida I had a window in my stall and in the evening I could see lots of humans walking in for the evening Gala. And the females had some bizarre things on their feet. I asked Ma Leueen to get a picture to show you the kind of thing I saw. Here is the photo she gave me.

I think that is pretty weird. How do they walk with their feet so uneven?. I asked Ma Leueen why the females wear those but she said she did not know. The male humans wear flat shoes like we horses do.

Well, my left front hoof felt like it was up on the inside and down on the outside. So I was trotting all off kilter. Ma Leueen stopped after a few steps and called to Barn Manager Carl and to Trainer Lynsey to come and take a look. They came into the arena and watched as I trotted again.

“He’s lame,” they both said.  Now, I knew I was not in any pain so  I had not done myself an injury.  But something was wrong. Ma Leueen took me back into the barn and Barn Manager Carl  lifted up my left front hoof.

“Ah! He’s pulled a nail!”   The humans all smiled. Carl took off the shoe and Ma Leueen took me back to my stall for my dinner. She hung my shoe up on my stall door. She took a lot of trouble to tie it up with baling twine so it would be upright and  explained  that there is a belief among the humans that if the horse’s shoe is hung so the ends point down that the luck will run out. Seems odd to me but I’m all for keeping good luck  so I didn’t say anything. 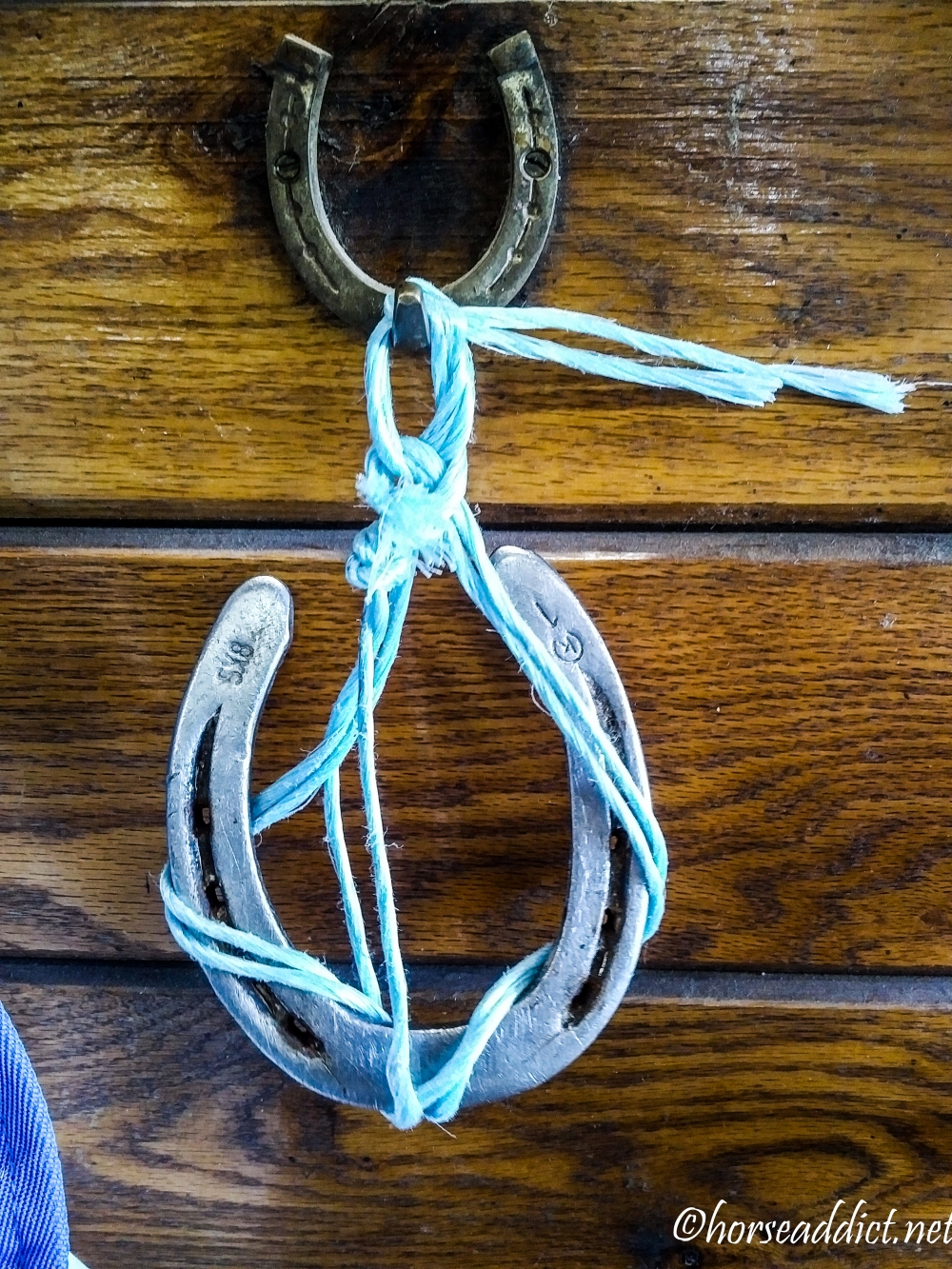 After dinner Carl took me into the  arena and made me trot in a circle on the lunge line. Then he ran alongside me , quite fast.  He told me I was fine  and he  was going to speak with Ma Leueen on the Tellingbone.  The Tellingbone; those things humans talk into and poke at with their fingers.  I have named it the Tellingbone.

Next morning Ma Leueen came early and  took me out for some grass. Here is a photo. I put my hoof forward so you can see it clearly. I have such a nice white sock on that ankle. Then Farrier Joe arrived and he straightened out my shoe and put it back on. He told Ma Leueen that I had done well not to rip up my hoof when I stepped on the shoe and pulled it. And here’s what else he said.

“He probably was lame because he could feel the shoe was uneven and he didn’t like that. ”  And then Trainer Lynsey said,  “Smart horse! If he had kept going on it he might have injured himself.”

Smart Horse!   Yup! She’s right. I knew something was wrong  It gave me a lot of satisfaction to know that Farrier Joe and Trainer Lynsey appreciated my intelligence.

Today the dentist came to see me and I’ll have to tell you about that tomorrow because my dinner has just arrived. Mmmmmm…… a nice big feeder bowl with soaked alfalfa cubes, beet pulp, rice bran and for seasoning a tasty supplement which Ma Leueen calls Biotic 8. Delicious!  So , till next time, Dear Humans!