My friend Winston, the Cavalry Black, has a busy life.  Like the other horses there are a number of ceremonial duties he takes part in and 2016 ,with the Queen’s 90th Birthday, has been an especially busy year.

Every day the Household Cavalry Mounted Regiment (HCMR) takes part in the Changing of the Horse Guard. As you may remember I first met Winston (that’s the name I gave him since his Blues and Royals soldier does not speak while on duty so I could not ask his name.For more on Winston see my earlier blog “The Day I Met a Cavalry Black”.) In comparison to some of the ceremonial duties the Changing of the Horse Guard is a small affair. Nonetheless when mu husband David and I watched the ceremony it was quite exciting. Some of the excitement was not planned….but more of that later. 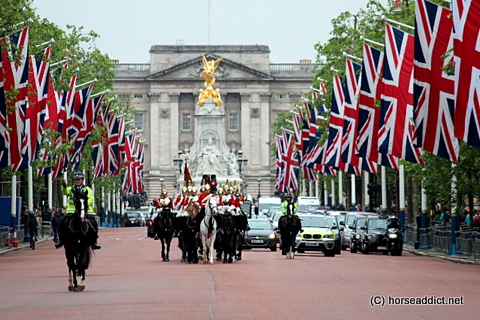 We went to stand at the side of the Mall to see the horses come up from Buckingham Palace. Once I saw them coming I went out into the middle of the road to get photos. Two mounted police were coming up ahead of the Horse Guards and they were soon shouting at us tourists to “Get off the road!”  We all did as we were told. 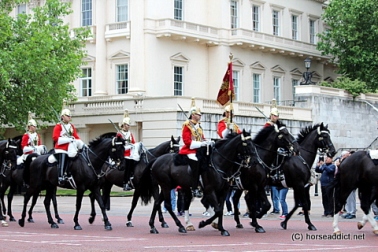 David was running alongside the horses as they turned off the Mall toward the Horse Guards Parade capturing it all on video with my phone.  I followed. Suddenly as they turned into the large forecourt the grey horse who carries the Standard Bearer spun sideways and then did some dramatic “airs above the ground” including a capriole like leap into the air. The unfortunate soldier was not able to remain with him and fell to the ground. I could see immediately that the young man was out cold. The other horses and troopers carried on as if nothing had happened. Well it is the British Army after all.  The grey horse was enjoying a bit of freedom and was finally caught by a soldier on the ground. The fallen soldier by this time was being seen to by the police. An ambulance arrived a few minutes later.  He was later able to stand and walk unsteadily to the ambulance. So I thought he had not broken anything but probably had a nasty concussion. Horses will be horses and even those trained to deal with crowds, flash photography and loud noises will still sometimes do something totally unexpected.

In the meantime the other horses had all lined up to await the old guard horses and soldiers. They were in a roped off area that was surrounded by onlookers like myself. I stood next to a mother with two young girls both of whom had little toy horses that they were holding up.

When both the old guard and the new guard had assembled there was a hand over of authority by the commanding officers and the old guard set off back toward the Palace and the Knightsbridge barracks. 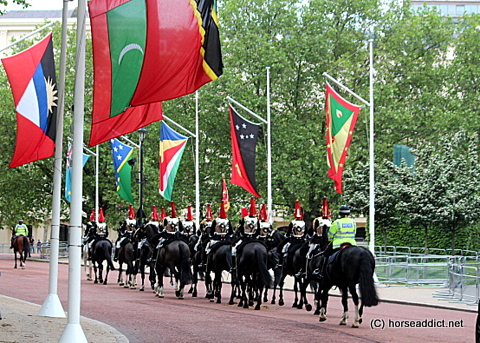 We did not stay in London to see the Trooping of the Colour and the Queen’s Birthday Celebrations. But I am pretty sure my friend Winston would have been taking part. Perhaps Winston could have been carrying a soldier playing in one of the two mounted bands. I wonder what he would have thought of that?

One of the horses that would have caught Winston’s eye would be the Drum Horse. This would be a Shire or Clydesdale of some 19hh! These big fellows have to carry the heavy solid silver kettle drums and they are specially trained as their soldier rider has to use his feet for the reins!

What other ceremonial duties would Winston have?  He would take part in the State Opening of Parliament which has four mounted divisions and over 100 horses and riders. Or perhaps he would take part in a State Visit. There are usually four such occasions in a year when a visiting leader will be meeting with the Queen and this also involves 4 mounted divisions. The Lord Mayors show has one mounted division, 25 horses and riders, as part of the procession. Winston would like this as there is a festive atmosphere to this occasion.

A serious duty is the Major Generals Inspection. For this the entire Regiment is mounted for an annual inspection in Hyde Park at the beginning of the main ceremonial season. A lot of work goes into grooming Winston and his comrades as well as hours spent cleaning, and polishing the “horse furniture” (the ceremonial tack).

As well as these annual events there may also be a Royal Wedding. In 2011 William and Kate’s wedding involved the HCMR. Does anyone else remember seeing that on the way back to the Palace after the wedding there was one Cavalry Black cantering along with no rider? I hope that was not Winston.

In 2012 there were the Queen’s Diamond Jubilee and the Olympics both involving ceremonial duties for HCMR.

So Winston has a busy schedule but he does get a holiday. Yes, a holiday. The Cavalry Blacks go to the beach!

The HCMR and the horses go to Holkham in Norfolk and although the Ministry of Defence ‘press release’ says they do a lot of training and a lot of work but the horses and soldiers do get some time for fun. They go to the beach and the horses roll in the sand and swim in the sea. Even the big Drum Horses take part in a swim and some time on the beach.   The soldiers must all be hardy souls as the water in the North Sea is bracing. Well, bracing is being polite is it actually bloody cold! But good for the horses legs!

What will happen to Winston when he gets older? He will be retired once his days of duty are over. If he is still fit and well a family may be found for him that will give him some light riding or he may be retired to pasture.  But he will not be cast aside and his years of service will be remembered.  I know I will remember him…Winston….my Cavalry Black.