Hwær cwom mearg?  Where are the horses?  If I was teleported back to the Middle Ages of 5th Century England this Old English phrase would be very useful for me. Horses, at that time, were essential for transportation and most importantly for supremacy in battle.  Now horses are not used in battle but in England the tradition of the military horse has not been forgotten and is kept alive with the Household Cavalry and the King’s Troops.

For this post all the photos have been kindly given to me by Rose Lewis, Berkshire Equine Photographer and Artist. I first saw Rosa’s work when she did a private commission of the Windsor Greys that were used in the recent Royal Wedding. I asked her if I could use some of her photos in a post about the horses in the Household Cavalry and Kings Troops and she agreed. I will leave a link to her website and Facebook page at the end of this post.

The Household Cavalry is made up of the two most senior regiments of the British Army; the Life Guards and the Blues and Royals. The mounted regiments alternate between ceremonial duties and operational units. The Life Guards can be recognized by the red tunic and white plume in the helmet and the Blues and Royals by their blue tunic and red plume. 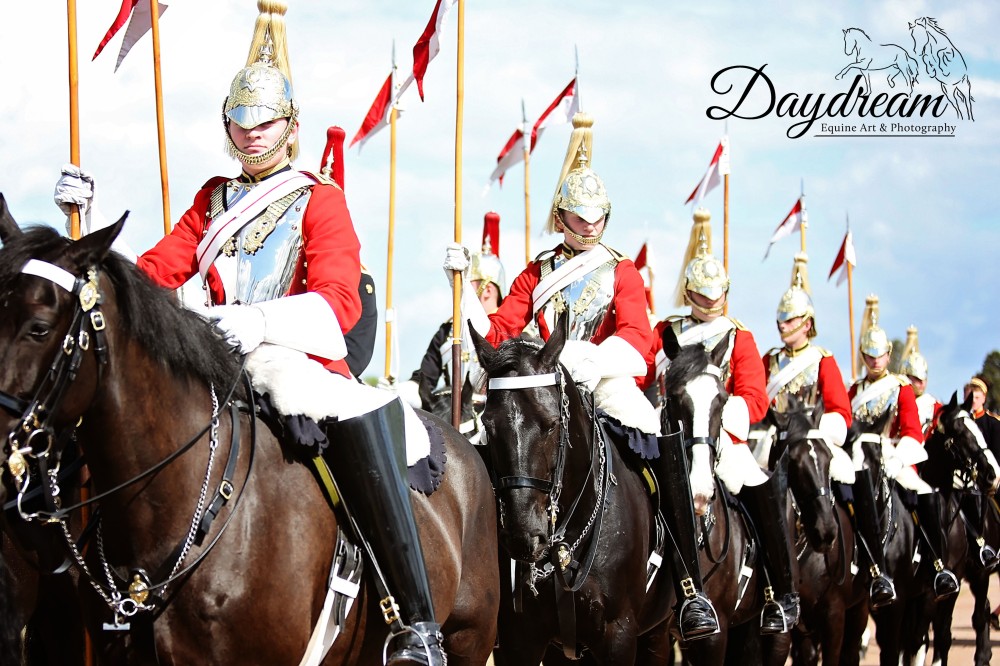 The horses, the Cavalry Blacks, are bred in Ireland and are a Thoroughbred, Irish Draught cross.  The Household Cavalry dates back to 1660 and acts as the Queen’s personal body guard taking part in the annual Trooping of the Color, mounting a Guard daily at the Horse Guards and taking part in any ceremonial and State occasions to accompany the sovereign. 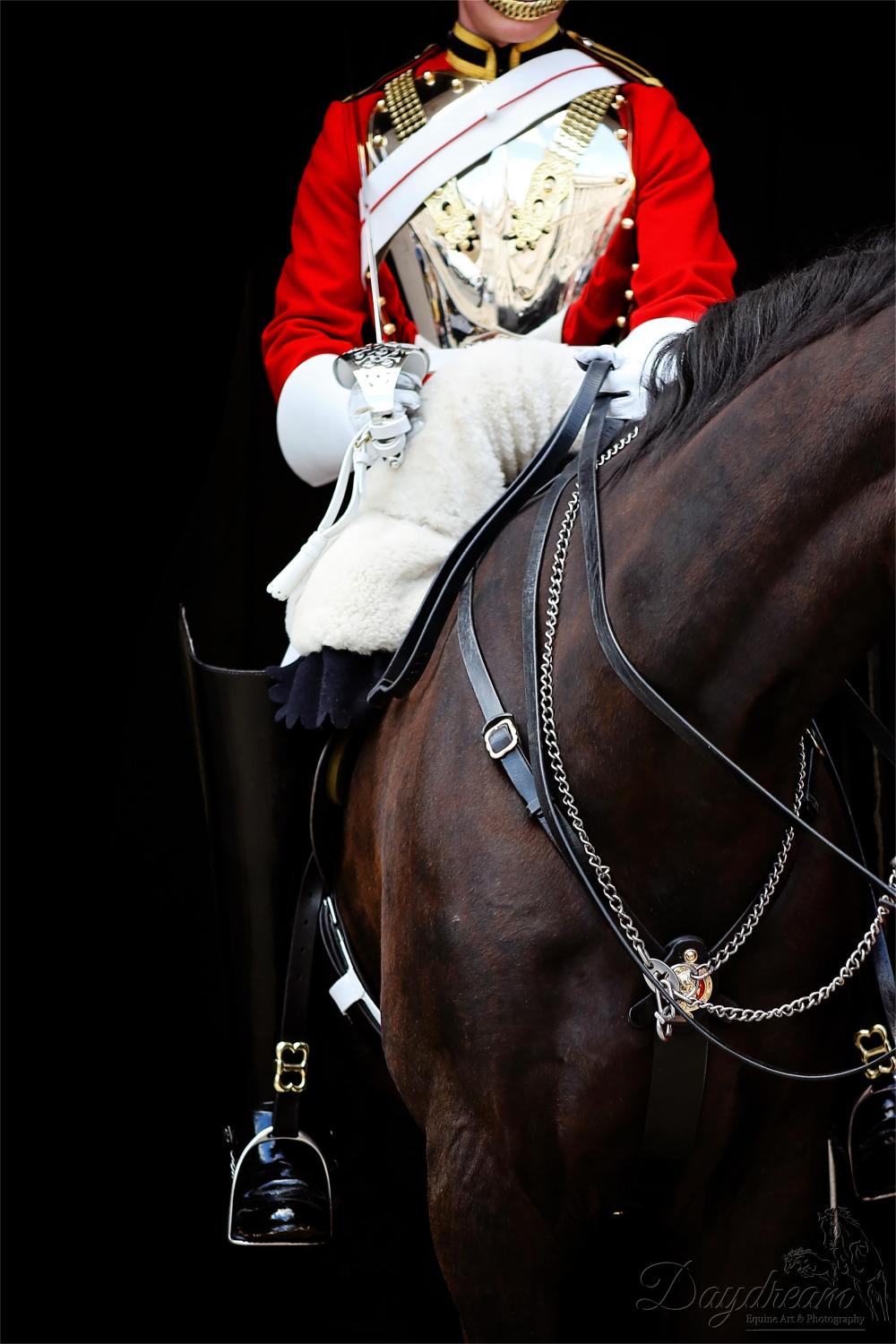 Even today there is a nod to the original purpose of the cavalry; a ceremonial axe with a spike is carried by a Farrier Corporal of Horse. The historical reason behind this is that when a horse was wounded or injured in battle so seriously that it could not be treated, its suffering was ended by killing it with the spike. If the horse got tangled up on harness on the poor roads of the olden days it could be cut free with the axe. 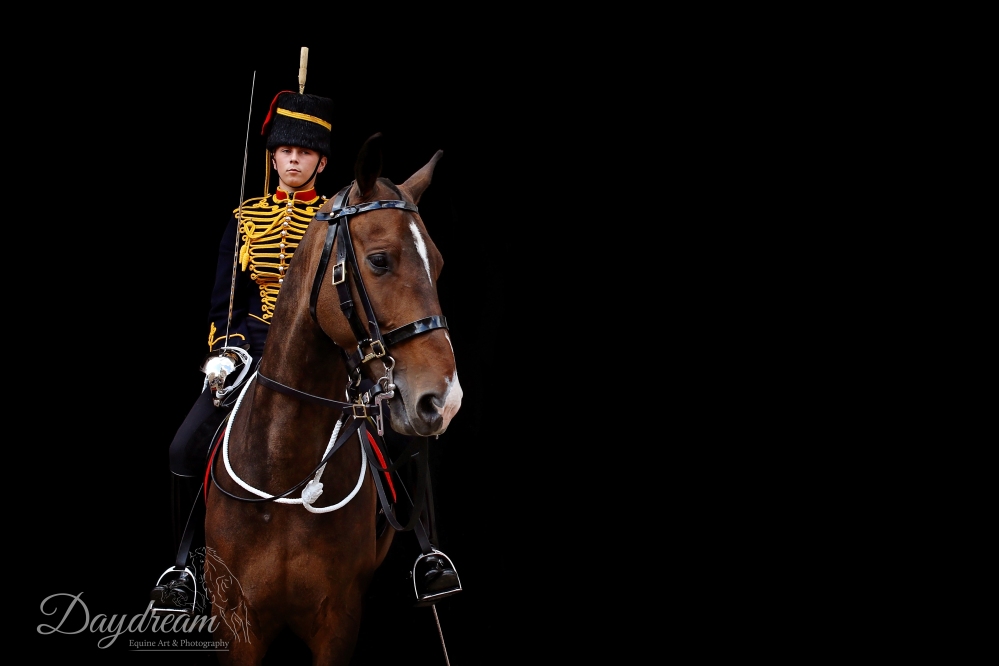 King George VI wished to form a horse-drawn artillery due to the mechanization of the last batteries of horse-drawn artillery after WWII. So in 1946 a Riding Troop was formed and was known as the “King’s Troop”. This troop would have a six gun battery for the firing of Royal salutes on Royal anniversaries and State occasions. They also provide a gun carriage and team of black horses for state and military funerals. The coffin of Diana, Princess of Wales, was carried on a gun carriage by members of the King’s Troop Royal Horse Artillery.

During the month of August the Kings Troops mount the guard at the Horse Guards as the Household Cavalry and the Cavalry Blacks are on holiday!

Each day they come from the Knightsbridge Barracks, through the arch at Hyde Park corner, and up the Mall to the Horse Guards Parade.

You can see that the riders in the tournaments have a small hat perched on their heads. This has earned them the title of “monkey men” as the hats resemble the hats that were worn by organ grinder’s monkeys!  I have it on good authority (from a retired cavalry officer!) that these riders are also the riding instructors so galloping, with only one hand on the reins,carrying a large flag, and executing thread the needle maneuvers is child’s play!

So this is where the horses are! They are here in England, not on battlefields today but on parade grounds, and at the arenas like Olympia in London. 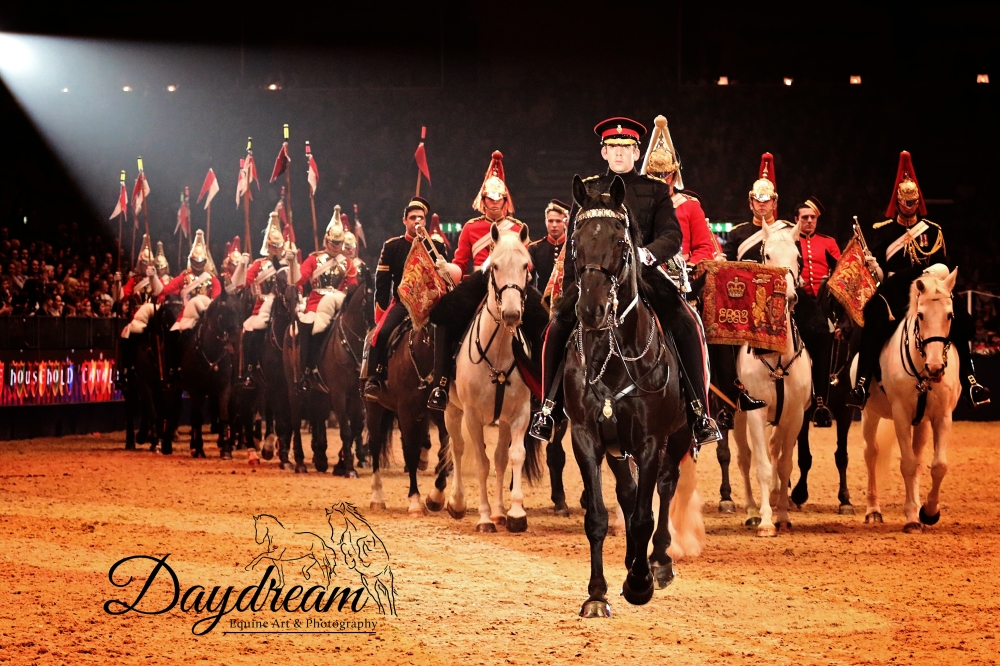 Thank you Rose Lewis for so kindly allowing me to place the wonderful photos of these horses in this post. Please visit her website:  Daydream Equine Art https://www.daydreamequineart.co.uk/