First and foremost I would like to thank Connie Gaube for the photos of Biasini and me at the RCRA show last weekend. Due to her computer being in for repair she was kind enough to send me the unedited photos and allow me to edit them for this post.

You may have read Biasini Speaks about the show and about the “huge and hideous bird” that tried to kill us on the Saturday during our Prix St. George test . If you have not read it there is a link at the end of this post.

On the Friday we had schooled in the ring we would be showing in. Biasini has a history of being nervous and rather spooky so I have established a routine to get him used to the rings we will be riding in. He also “speaks” about that in his blog post.  He was quite relaxed on the Friday and schooled well. But……in the morning a tent was put up at the A end of the arena. Here is a diagram of the dressage arena and I have drawn in where the tent was placed. It was a far enough away from the arena to give ample room to go round the outside of the arena before starting the test. The Stewards ,who do the tack check after each rider comes out of the ring, had put up the tent to protect from the rain that was forecast.  The problem was the Biasini had not seen the tent the day before!

We started our warm up and Biasini was in very good form. He is wearing boots for protection on his legs.

Before going into the ring we take off the  boots as they are not permitted during the test. In this photo the boots are off and we have about five minutes before my ride time.

We went round the outside of the arena and when the bell was rung for me to start we entered at A, cantered down the centerline to X , halted and saluted the judge at C and started our test.  As we were crossing the arena on the diagonal (H to F) for our Medium Trot  I could sense that, out of the corner of his eye, he had seen the tent.

But he did not react and we continued with the trot tour of our test.   The diagonal for the Extended Trot was directly toward the tent.  But all went well . He powered forward until we got to the end of the diagonal and as the judge at C put it he  “faded”.  This is a polite way of saying he had gone back to a diminished trot before he should have.  No worries, we continued on.  We finished the trot tour and then came the walk. All continued to go well. We picked up the canter, on through the canter zig zag, then the pirouettes. They were good!  The four tempis (changes of lead every fourth stride)  First change was alright and then…..mid change…. the wind came up and the tent puffed up. He saw it!

We continued with the changes but the count was lost. I would ask for a change and he would answer that he just could not do that right now as our lives were in danger. But we did some random changes and made it to the end of the diagonal. You can see he is still fixed on the tent. 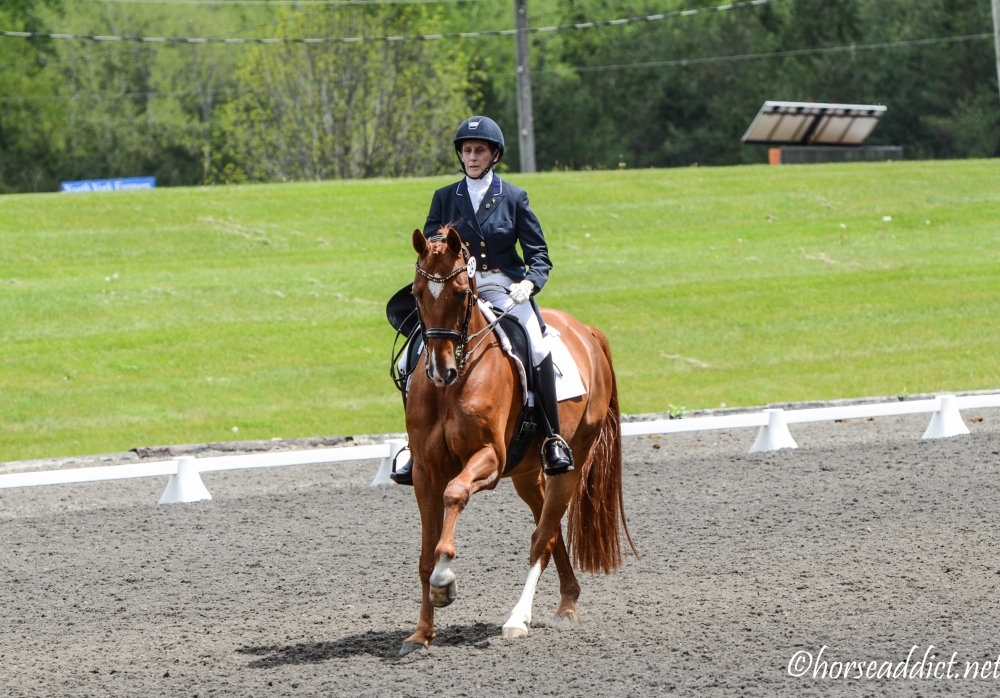 On to the three tempis which were good. Then onto the “tent ” diagonal again for the extended canter. It started out well. But then Biasini felt we should go to the right and get away from that “thing” that was still puffing and flapping. You can see I have my left hand away from his neck and my right hand has the reins on his neck. I cannot just crank his head around to the left he must stay straight. I am also trying to keep things looking like it is all AOK as the judge at E is there to my right.

It was a struggle.

But we made it to the end of the diagonal and then he just said “I can’t go on” and broke to trot. I brought him back to walk to recompose him and picked up the canter. We had missed the flying change that is required at the end of the diagonal completely and so, quite rightly, the Judge at C gave us a 2 ( out of 10) for that movement.  We turned down the centerline to halt and salute. If that is not a perfectly square halt I don’t know what is!

I was so disappointed because a lot of our work had been so good but  I knew the tent had put the kibosh on  several of the movements.  But that is what can happen sometimes with horses. I also had to remind myself how far he has come . He did not spin or spook or shy or do any of the things he might have done a couple of years ago. I came out of the ring for the tack check and my coach Belinda Trussell was there with a huge smile on her face.  She was so happy with the  movements that had gone well: the extended trot, the pirouettes and his overall frame and connection.  The Steward told me I could bring him back at the end of the day to let him have a look at the tent. Belinda suggested I tack him up at that time and ride him toward the tent, just at the walk, and the next morning, before the show started, to hand walk him around it.

We did that and the test on Sunday was a mistake free test. I was so proud of him getting past the tent crisis and not showing any trace of his fear of it. We went home with two red ribbons for First Place!